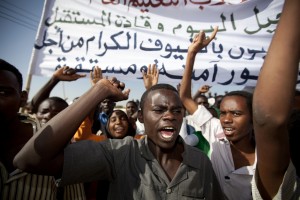 On 4 March, Sudanese police dispersed a group of 100 students protesting in front of the presidential palace. The students had gathered to voice their frustration with negotiations between the governments of Sudan and South Sudan, which have failed to address many of the human costs of the July 2011 secession of South Sudan.

Particularly distressing for many university students in Sudan are unresolved nationality issues. The two governments originally agreed to a nine-month transition period running from 9 July 2011 in which to adopt procedures to enable nationals of the other State to regularize their status, to acquire necessary identification, employment and other relevant documentation.

However, with the end of this transition period approaching next month, few such procedures are in place. For university students from the south who attended universities in the north and students who attended northern branches of southern universities, this has meant that they are unable to graduate or obtain diplomas from their original schools.

Aside from nationality issues, a severe economic crisis and high food inflation contribute to general insecurity in Sudan. Khartoum was built on oil wealth; when Sudan was still united, southern oil comprised 40 percent of the country’s budget. Since the split, Sudan has received neither oil payments nor transit fees.

Combined with the failed promise of international aid to Sudan to help fill budget gaps following the South’s secession, Sudan faces unprecedented economic challenges. These challenges are particularly acute for youth in Sudan and especially those with university education and expectations for the future.

In response to the economic and political weakness of the Sudanese state, youth movements have become more present and active in the last year and a half. There are several different categories of student youth movements in Sudan, with the largest separation being between secularist groups such as Girifna, and the various SPLM-N offshoots and Islamist youth movements.

Each of these movements, like the youth groups of the Arab Spring and Occupy Wall Street use Facebook, Twitter, websites, and cell phones to organize demonstrations and protests. Inspired by last year’s Arab Spring and an already weakened Sudanese state, these various groups are united in their desire for regime change.

Girifna (Arabic for “we are fed up”) was formed on the eve of Sudan’s 2009 elections. As a youth movement, the group insists that while political parties are all about politics, their movement is about giving voice to the common Sudanese. While not supporting a particular opposition group, they are firmly opposed to the current NCP-led government. By pushing for democratic change they seek to “scrub” Sudan of twenty years of undemocratic governance.  To achieve this goal, the group organizes sit-ins and demonstrations, and spreads fliers encouraging democratic participation.

With spotlights from US-based activist organizations like the Enough Project, Girifna has received the majority of Western media attention. However, Islamist youth movements are an equal driving force for change in Sudan. Backed by key Islamic leaders, these groups claim to favor democratization and oppose Sudanese President Omar al-Bashir’s violent tactics, fixed elections, and corruption. In a state with an Islamic majority, they argue, democratization makes more sense than violence.

Despite the common goal of regime change shared by each of these movements, prospects for change in Sudan today through non-violent resistance are not great. Twice in the history of Sudan (in 1964 and 1985) broad popular movements have succeeded in overthrowing regimes (although both failed to establish democratic governance). These revolutions were preceded by political instability and a bankrupt economy similar to what we see in Sudan today. However, the opposition enjoyed a high level of organization that is not present today. This is partially a result of a lack of trust between and within various movements as well as a strong military that is so far loyal to the government. In this way, the situation in Sudan is different from Egypt or Tunisia on the eve of their revolutions. The overthrow of repressive regimes in each of these countries relied heavily on the willingness of army commanders to abandon their presidents, allowing for quick transfers of power with limited bloodshed.

The situation in Sudan more closely resembles that in Syria, where the army has remained mostly loyal, continuing to carry out orders to repress resistance. In Sudan it is highly unlikely that the army will side with civilian movements, largely because of the perceived external threat of the Sudan People’s Liberation Army (SPLA).

In the meantime, students and other Sudanese will continue to experience the frustrations of a state in limbo. During the 4 March demonstration students carried signs that read, “The fate of students must come before oil.” For now these voices remain marginalized.