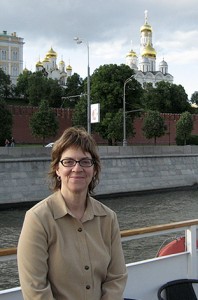 Central Asia is a strategically vital yet poorly understood region. Dr. Edgar’s research illuminates how the Central Asian republic of Turkmenistan was formed under Soviet rule, tracing the emergence of a Turkmen national identity and the transformation of indigenous society. A knowledge of the 20th-century history of the Central Asian republics is vital if policymakers are to understand their current political and social circumstances.

Her current research project examines ethnic intermarriage in the Soviet Union, with an emphasis on Central Asia. From the 1930s until the collapse of the USSR, Soviet authorities celebrated mixed marriages as proof of the unbreakable “friendship of nations.” In “backward” regions such as predominantly Muslim Central Asia, the communist regime saw intermarriage as a means of introducing modernity and a common Soviet way of life, along with more equitable gender relations. Using archival documents, published Soviet sources, and oral history interviews, Dr. Edgar analyzes both the official discourse on intermarriage and the subjective experience of mixed families between 1945 and 1991.

Adrienne Edgar is an associate professor of history at the University of California, Santa Barbara. After receiving her Ph.D. from the University of California, Berkeley in 1999, she spent one year on a post-doctoral fellowship at the Davis Center for Russian Studies at Harvard University before taking up her current position. Edgar is the author of Tribal Nation: The Making of Soviet Turkmenistan (Princeton University Press, 2004), and a number of articles on ethnicity, nationality, and gender in Soviet Central Asia. Her awards have included fellowships from the Social Science Research Council, IREX, and the Alexander von Humboldt Foundation (Germany) and an article prize from the Berkshire Conference of Women Historians. 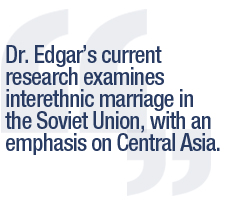