Why does one developing nation prioritize foreign direct investment (FDI) while another barely acknowledges it? What are the developmental implications of different political attitudes towards FDI? This project compares the state of the extractives industries in Kyrgyzstan and Tajikistan and the political economy of both countries to examine both questions. Mining and energy are attractive points for FDI in developing countries, as the extractives sectors traditionally involve highly capital and technology-intensive projects that cannot be funded or realized domestically.  I therefore have used the mining sectors in these two countries as lenses through which to examine how FDI operates in each case. Both countries have significant demonstrated resources of high-value minerals such as gold, copper, silver, and uranium, and yet the Tajik mining sector is significantly less developed than that of Kyrgyzstan. In addition, mining plays little or no role in Tajik politics, while it is a critical and contentious topic in Kyrgyzstan, seemingly even beyond the sector’s actual influence on the state’s economy.

I conducted a comparative analysis of the mining sectors in Tajikistan and Kyrgyzstan during the summer of 2013 with the assistance of an SSRC Eurasia Program Pre-Dissertation Award. During the month that I spent in Central Asia, building on previous experience in the region, I interviewed members of the three key stakeholder groups relevant to my research in both countries: the private sector, the government, and civil society. While civil society in both Tajikistan and Kyrgyzstan have obtained some successes by starting up the process of Extractive Industries Transparency Initiative (EITI) certification, transparency in Tajikistan is somewhat irrelevant as the mining sector is so little prioritized. In Tajikistan, a large silver mine known as Konimansur-Kalon has been in the feasibility study stage for several years, despite the support of the International Finance Corporation. In Kyrgyzstan, however, gold mines have been active since the mid-1990s, and protests frequently erupt over the role of multinational mining corporations in the country’s underdevelopment. My research uncovered an intriguing pattern in the comparison of these two states: the Tajik government relies heavily on remittances, which make up roughly 30% of GDP. The economy is fundamentally outward-oriented. Many Kyrgyz citizens also engage in labor migration, but the domestic economic contribution is much more significant.

In open-ended interviews with members of the various stakeholder groups, I found three primary factors that accounted for the difference between Tajik and Kyrgyz extractives investment patterns. Firstly, the Tajik civil war that stretched across most of the 1990s made the state an unattractive location for FDI or major development projects until the mid 2000s. Tajikistan is operating with a ten-year lag behind Kyrgyzstan as a result. Secondly, the geostrategic significance of Kyrgyzstan has not only been greater than that of Tajikistan, but it has also been more geared towards maintaining positive relations with the relatively functional Kyrgyz government. In Tajikistan, Western powers focused on the Afghan conflict did not have the focal point of Manas airbase in Kyrgyzstan to motivate FDI, aid, and technical assistance. In addition, Kyrgyzstan shares a border with China, and is therefore instantly a prime location for proxy conflict between the US, Russia, and China – leading, again, to higher levels of FDI and forcing the Kyrgyz government to play a difficult balancing game between these three powers that has contributed to the overturn of three governments in the past decades. Finally, the Tajik government and bureaucratic apparatus remains primarily populated by Soviet-era players who exhibit a fundamental distrust of FDI as well as a lack of understanding of it.

Natasha Chichilnisky-Heal is a doctoral student in the Political Science department at Yale University, where her research focuses on the political economy of development. She uses natural resource extraction in developing nations as a lens through which to study challenges they face in political and economic developmental processes. Although she formerly focused her research in Eurasia, she has research experience in both Africa and Latin America, and is currently working on extending her theories across all three regions. Before coming to Yale, Natasha received her undergraduate degree in Political Science and Mathematics from Columbia University in three years, after which she worked in development finance in Mongolia, with a microfinance investment fund manager, and was financial analyst and strategic advisor for an anti-climate change technology firm. She is a Committee Member of the Next Generation Energy Leaders Council of the World Energy Forum, a Social Science Research Council Pre-Dissertation Award Fellow, has presented at five conferences on 3 continents, and speaks French, passable Russian, and basic Spanish. 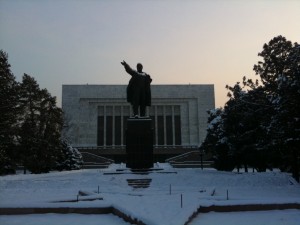