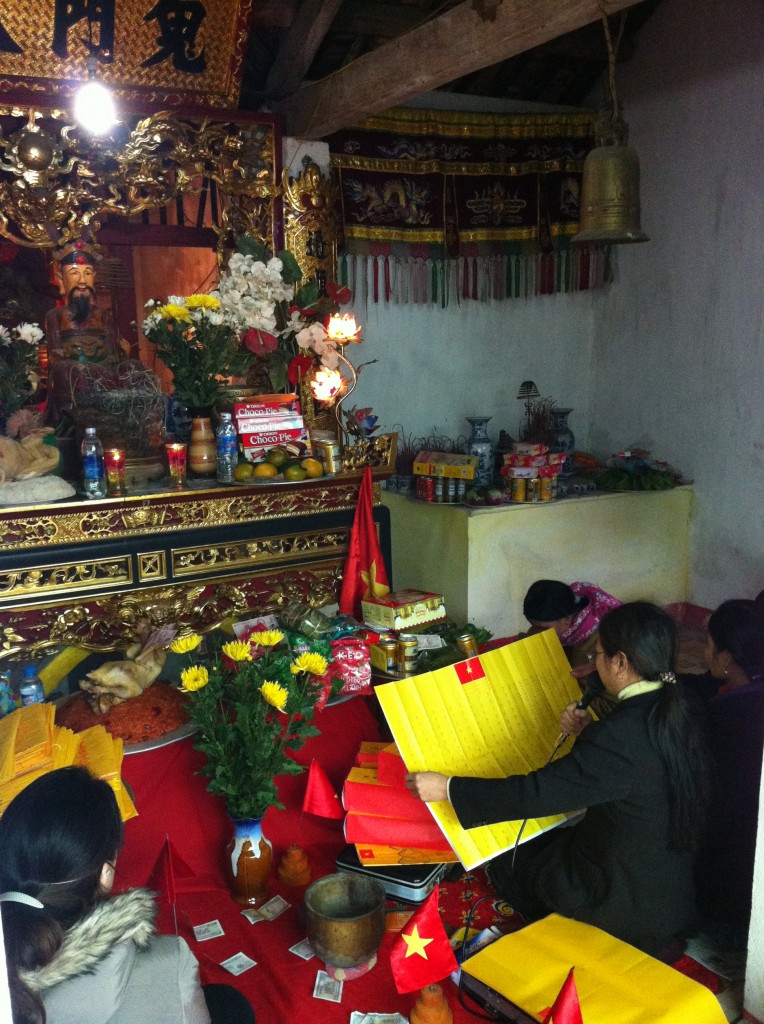 On 23 December 2012 we visited the Mother Goddess Shrine adjunct to the Great Kneeling Elephant temple, one of the four spiritual gates of the ancient citadel in Hanoi, in the company of Mr. Thien, a successful businessman and chairman of a group doing research on what they called “telepathy.” He had arranged for me to see some spirit mediums who would try to contact the spirits of my deceased family members. For that to be possible I had to send him by email beforehand the names of my father, mother, and brother, as well as the places where they were born and where they had been cremated. Such information was used by the telepaths to apply for a “spiritual visa” in order for the spirits to enter Vietnam. When we arrived in the temple in the early morning there was a group of around twenty people waiting. They invited us inside the temple and began to sing a song of praise of the gods present in the temple and, notably, a patriotic poem on the ancient history of Vietnam, to which the temple was connected. The gods in the temple were regarded as the fathers and mothers of the people of Vietnam, and others were the representatives of the four elements, altogether a rich pantheon that was connected to the location of the temple at one of the original four gates of Hanoi, protecting the city. After the song, they prayed to the gods to ask them permission to perform the invitation of the spirits inside the temple. The gods answered with a refusal, saying that since I was from a cold country I should be able to bear sitting outside in a Hanoi winter that was far warmer than the winter in my own country. This seemed a reasonable argument, and the whole party moved outside where attempts were made to contact the spirits of my family. A possible other reason to move outside was that they would not know what kind of spirits would show up which could pollute the temple. Several mediums got possessed while I spoke in Dutch about my family members, but none of them could respond to me in Dutch, although several languages were attempted.  A further attempt by spirit writing in which a medium is directed to write spirit language (a nonexistent language) on a piece of paper that then can then be interpreted also did not give any satisfying result.

This is one example of a ritual in Vietnam in which prayer is just one element of a larger set of ritual actions that are all interwoven, including worship, singing of praise, reciting poems, spirit writing, and spirit possession. There is much to be interpreted here in terms of symbolic action, the context of the ritual event, and the background of the participants. Prayer is just a relatively small part of it. This is true for a large number of ritual actions in South, South-East, and East Asia in traditions that include major religions such as Hinduism, Buddhism, and Daoism. Actually, it does not make much sense to focus specifically on prayer in these traditions. What we have here in our SSRC New Directions in the Study of Prayer program is the typically Abrahamic emphasis on prayer, and more specifically the typically Protestant Christian version of that. This explains why the large majority of research projects in our program are about Christianity, a minority being about Catholicism, Judaism, and Islam, while an insignificant number deal with Hinduism and Buddhism, and none with other major traditions, like Jainism, Daoism, and Shintoism. Protestant Christianity has become the model for all religions during the imperial encounter with non-European traditions since the nineteenth century. It has become such a dominant paradigm that reformers in these traditions have also tried to use in modernizing their traditions. At this moment in history we cannot do better than engaging that process of translation and interpretation in which Western concepts are used to understand other traditions. This is where my interest in “prayer” starts. What can the use of a seemingly universal concept of “prayer” tell us about our conceptions of religion and our understanding of cultures and traditions that are different from Christianity?