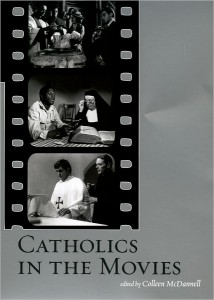 Not surprisingly motion pictures proved to be a potent medium for depicting the interaction between humans and supernatural others at the same time that the congregation of large numbers of Catholics in American cities created an audience for them. The general subject is the focus of an excellent collection, Catholics in the Movies, edited by Colleen McDannell, New York: Oxford University Press, 2008. Of special interest are the chapters by Paula M. Kane (on the Song of Bernadette, 1943); Colleen McDannell (on The Exorcist, 1973); Tracy Fessenden (on Entertaining Angels: The Dorothy Day Story, 1996); Darryl V. Caterine (on Santitos, 1999); and McDannell’s closing essay on Mel Gibson’s The Passion of the Christ (2004).

Whatever Hollywood’s intentions, going to see films such as The Song of Bernadette (about the 1858 apparition of the Virgin Mary to Bernadette Soubirous in Lourdes, France) and The Miracle of Our Lady of Fatima (1952, about the apparitions in Portugal that became the pivot of post-World War Two Catholic supernatural anti-Communism) was seen as devotional practice. One of the greatest and most troubling of such films was the 1955 Spanish production Marcelino pan y vino (in English, The Miracle of Marcelino), by the celebrated Hungarian director (who worked after World War II in Italy and Spain), Ladislao Vajda. The film depicts the relationship that develops between a little boy, who was abandoned as an infant in a Franciscan monastery, and an image of Christ on the cross that is hidden away in the monastery’s attic. In their conversations the statue comes alive and Marcelino, sensing that the crucified figure is hungry, brings him a meal of bread and wine stolen from the kitchen. [Spoiler alert!] Asked what he wants in return for this kindness, Marcelino answers that he wants to be with his mother in heaven and the film ends with the boy dead at the foot of the cross.