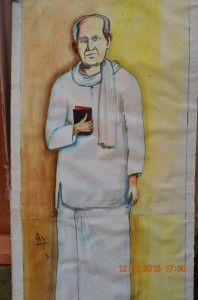 We climbed the hill in our cab to get a glimpse of that old church of Habel, the first “convert” among the slave castes of Travancore, thinking how difficult it was for the missionaries to reach Kaippatta on that day. In no time, accounts of that eventful day left by the missionary Rev. John Hawksworth spring to our mind: “…The paths through the jungle were indeed converted into streams, so that we had to wade through the water a great part of the way, and it was unpleasant having to wait some hours in our wet clothes.” What began as the baptism of Habel quickly grew into a “mass movement.” By the turn of the twentieth century, the Church Missionary Society in central Travancore counted as members more than 35,000 Dalit Christians, more than half of their total membership. The journey from first baptism proved to be an ordeal for the slave castes, due to upper caste reprisals. Upper caste Syrians twice reduced to ashes the thatched church building first erected at Kaippatta. Yet, the assembled slaves standing among the ashes exclaimed: “It was here we first found the Saviour and here, on this spot, we will worship Him still. They objected to seek the shelter of a neighbouring tree; so the service was held on the spot, which they regard as consecrated ground.” And the saga of prayer and worship continues. 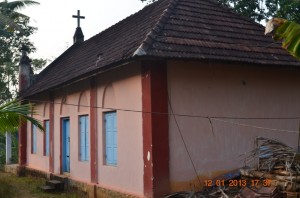 Literally driven away in the nineteenth century from the mainstream of social life and thrown into ghettos, the untouchable slave-castes or present-day Dalits led a life of despair and dispossession until Protestant Christianity entered their lives. The slave castes were seldom considered human beings worthy of dignity and self-worth; the coming of Protestant Christianity changed their life world. Before missionaries intervened, slaves’ lives were marked by the life-affirming practices of witchcraft and ancestral worship. Following Protestant intervention, these gave way to a reformed social life and to the faithful religious life of the slave-castes.

For the missionaries, and possibly for others as well, the slave castes “appear as new creations,” to use the words of Reverend J. Tharian, an early native pastor from Travancore. The people who joined the missionary Church began to reflect on their position in the local society as they were gradually coming out of their agrarian slave past, although their everyday lives remained dependent on the local landed gentry—and in many cases their lives were not better at all. Notions of self-worth and honorific titles were added to their names. Slave castes accepted changed spatio-temporal notions and new conceptions of the body in no time. The small huts and places of dwelling and the newly constituted sacred space of the church and of the “slave school” became spaces which were not mediated by caste hierarchy but rather by hope and new imaginations: of self-worth, dignity, and equality.

What were the historical conditions under which Dalits embraced Christianity? What are the stipulated inputs of faith? What are the protocols by which a person may be designated religious and faithful? These are the questions that crop up in my mind when we analyze religious transformation or “conversion.” These questions lead to us to explore dimensions of social life under colonialism that are not consumed by the hackneyed theories of nationalist historiography or by the postcolonial studies which dwell emphatically on the colonizing tendency of the “foreign imperial missions” or contend with the “hegemonic European representations of India.”

Many of these questions could be answered with a careful reading of the archives, but surely not all of them, particularly those on faith, prayer, and convictions on salvation. So, we are continuing with our ethnographic journeys. The ethnographic surprises we encounter are so many that it is difficult to list them all in a blog, but some will follow in subsequent postings. However, one thing is certain to us. The history of Christian missions is not a single story of imperial domination and indigenous acquiesce but rather a convoluted story entailing Dalit subalterns “designing their own selves” and crafting their own histories under the conditions of colonialism.