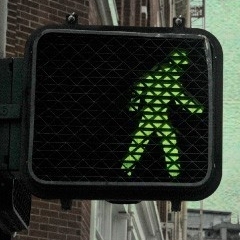 To be clear, re-urbanizing evangelicals are not the first Christians to perform prayer walks. Holy Land pilgrims traverse biblical landscapes, retracing iconic and inspired footsteps. Catholic communities find creative ritual forms for remembering the Stations of the Cross. And charismatic missionaries walk village sites as a form of “spiritual warfare,” praying over locations where they believe the demonic reigns. The walking prayer of re-urbanizing evangelicals, like these other expressions, fosters an approach to prayer that is definitively emplaced and thoroughly embodied. It is concrete, not abstract; asphalt, not mere interiority.

Numerous tactile and sensorial elements are vital to evangelical walking prayer. The hands of pray-ers interlock with one another—trading oils and sweat—as they pray over selected street corners; perhaps the site of a car accident, some violent crime, a future business, an old apartment, or a perfect vantage point for viewing the city. Pray-ers lay hands on stone and brick buildings, to bless a food market or seek healing for a dying retail store. When churches like The Village do walking prayer, they are cast into the sensory overload that is city life. Hustle, bustle, frenzy, squealing brakes, honking horns, and passersby clash with our most readily available images and associations for prayer, in which piety and transcendence are achieved via silence. If the prayer shawls documented by Anderson Blanton are worn to “prevent distraction,” urban evangelical walking prayer seeks and confronts distraction.

Understanding walking prayer requires full attentiveness to embodiment. Shoes absorb the repeated shocks of soles hitting the ground; lifting, only to hit again. Feet and legs tire as prayed words connect distant city spaces. Pray-ers are exposed to the elements. As evangelicals “lift up” locales, they are surrounded by warmth or by chill, they shiver in brisk wind or they bask in cozy sunlight. If we are working with a model of prayer in which the praying person is severed from their physical setting because they have entered some altered state of consciousness, we are poised to miss how being-in-the-elements might actually help constitute walking prayer. We can further appreciate this embodied nature if we also attend to walking as a specific kind of movement. Walking is not jogging or running (another option, I suppose, marathon prayer). It is slow, deliberate, self-determined. A walk is not, if we are being precise, an amble, a saunter, a meander, or a stroll. The latter connote an aimlessness and leisureliness that walking lacks. Walking, of course, is also not standing still. This, too, violates our expectations for how middle-class evangelicals pray together: shouldn’t they be in a living room somewhere? Movement typifies walking prayer, and by extension allows re-urbanized evangelicals to restate to themselves that their faith is not of the suburban kind.

Theorizing the materiality of prayer is not limited to the making, use, and exchange of objects. Materiality also gathers around themes of emplacement and embodiment. Walking prayer nicely captures these material elements and, in addition to the fact that it is a rapidly increasing practice among American Christians, deserves systematic ethnographic attention. I encountered The Village and other re-urbanizing evangelicals doing walking prayer late in a fieldwork project, and was unable to fully explore this phenomenon. But, such an inquiry would be most welcome in the comparative study of evangelicalism, Christianity, and prayer as a form of religious practice. Two sets of questions might provide a starting place. First, what cultural work does walking prayer perform inside a local prayer economy? Certainly, prayer happens in a variety of ways among members of The Village. But what do these different performative contexts have to do with each other, and what, if any, is the distinctive contribution of walking prayer to the ideals of a prayer-full life? Second, how is walking prayer integrated into community aspirations and strategies? In the case of re-urbanizing evangelicals, walking prayer fosters a localized sense of place and bolsters the broader project of urban redemption. In this way, walking prayer—in all its materiality—is central to who these evangelicals are, and hope to be.