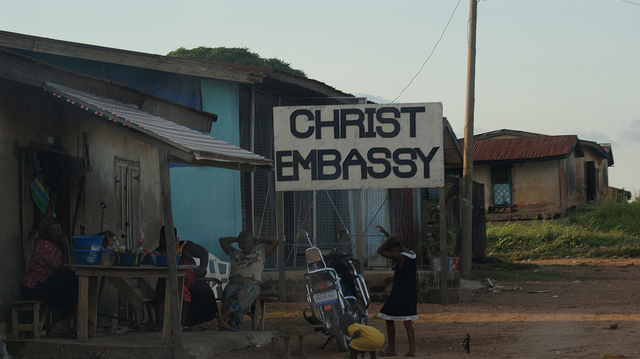 In African Pentecostal circles, a lively and contentious debate about the meaning and ramifications of this passage persists. While there is general consensus on the spiritual renovation that a new member of the body of Christ is expected to undergo, understandings of and attitudes toward the ‘old’ traditions and ways of life vary. How should a ‘born-again’ dress, for instance? What kinds of places, or even food and drinks, must she avoid? What should be the attitude of the Christian towards non-Christians? Finally, how should a born-again Christian negotiate the ‘old’ cultural regimen to which Christianity is supposed to stand in normative opposition? In reality, the Nigerian Christian (and this is particularly true of the Yoruba Christian) is in continual negotiation with the two worlds, creatively balancing the desiderata of Christianity with the strictures of oro ile, or ‘traditional’ ritual.

The inability to totally vacate one for the other is intriguing, if for nothing else than the epistemological impasse (and the pageantry of personal and institutional hybrids) that it produces. Yet, the never-ending attempt among the Saved to make a clean break with the old is equally, if not more sociologically, beguiling. It involves the cultivation of a new kind of identity, the main plank of which is usually either the acquisition of an entirely new name, or the modification of the old. I will focus here on this phenomenon of name change—its symbolism for the believer and the new insights it produces into prayer.

The student of the missionizing encounter with Africa will recall that name change was a key component of the proud ‘Africanism’ that the early educated pastorate proclaimed and embodied. Three prominent examples from Yorubaland immediately come to mind. These are David Brown Vincent, J.H. Samuel, and Joseph Pythagoras Haastrup, who became Mojola Agbebi, Adegboyega Edun, and Ademuyiwa Haastrup, respectively. Contemporary name change by Yoruba Pentecostals is interesting as a historical counterpoint, especially when seen as part of a similar struggle to grapple with a crisis of identity emanating from the experience of religious conversion. The major difference of course is in the contrasting attitudes and reaction to ‘traditional’ spiritual categories.

For its part, the cultural nationalism of the late nineteenth- and early twentieth-century converts was informed partly by a view of indigenous traditions, values, and forms of devotion as being fundamentally compatible with Christian mores and ideas. On the contrary, for contemporary Pentecostals, traditional religious categories and practices are (as Asonzeh Ukah puts it) “hostile forces that must be eradicated through aggressive missionizing strategies.”

Within this imaginary, there is no better illustration of the traditional ‘demonic’ realm and the threat it poses to the new spiritual identity than one’s name. Names are not innocuous appellations. Instead, they are signs; active spiritual markers that simultaneously carry historicity and suggest futurity. In Yoruba cosmology, a name is almost akin to a promissory note, suggestive of a virtuous future for an individual. It is also a fundamental part of social exchanges between kin. Hence, getting a “good” name (an ideology that illuminates the furor over the name of the incumbent Nigerian president, Goodluck Ebele Jonathan) is not just a way of laying claim to a new personhood, a la 2 Corinthians 5:17—it is also a way of appropriating better life chances and liberating oneself from the perverse spiritual legacy of the ‘old.’ Thus, a name becomes the crucial determinant of one’s destiny; a prophesy, and a wish (prayer?) for the future. That this matters exceedingly to (Yoruba) Pentecostals is seen in the rash of name changes and the adoption of new ones in accordance with the spiritual formula I have just laid out.

The first part of that process is a conscious abandonment of names associated with Yoruba deities or Orishas like Shango (the god of thunder), Ogun (the god of iron), Oya (the goddess of the river), and Eshu (the trickster god of duality). It is not as if every Mosadiwin (I take refuge in the ancestral spirits) has suddenly become Mosadijesu (I take refuge in Jesus), but that in the ascendant spiritual paradigm in which the former has suddenly become uncool, if not totally taboo, there is considerable pressure on the bearer  to “modernize” or “Christianize.”

The range of social technologies involved constitutes the second part of the process. For many Pentecostals, it is enough to lob off the first incriminating part of a name. Thus, an Ogundamilare (Ogun has judged me right) becomes a simple ‘Dare, while Shangobiyi (Shango begat this) becomes ‘Biyi. Many ‘Wales are in fact Oyawale (Oya comes home) or Oduwale (the oracle comes home), while plenty of ‘Timilehins have been shorn of their Ogun, Oya, or Shango. A different strategy is to replace the name of the applicable deity (Ogun, say) with Olu (shortened form of Oluwa, one of the many Yoruba names for God), hence Ogunbiyi (Ogun begat this) becomes Olubiyi (God begat this), and Oduseyi (the oracle has done this) can quickly become Oluseyi (God has done this). With Ogundiwin (Ogun becomes Iwin) though, the problem is not easily resolved.

Increasingly, even attempts to find some common ground between the “old” and the “new” are giving way to radical new names that signpost an almost avant-gardist religiosity. For the new age Pentecostal, a name is a totem of a new individuality, an emblem of the power of a fresh anointing, and to review a sample of such names is to open a window into a specific social consciousness. From an inexhaustible list: Miracle, Laughter, Pray, Praise, Praise the Lord, Prayer, Success, Testimony, Living Testimony, Prosper, Prosperity, Yuletide, Independence, Worship, Answer, Favor, Jesus Is Coming, Light, Pillar, Rhapsody, Hallelujah, Good News, Divine, Ministry, Rapture, and last but definitely not least, Pentecostal.

Collectively, these new names, whether individual or institutional, highlight an emergent social economy denominated by widespread subscription to an effusive and all-embracing religiosity. For instance, the allusions to fire and fury suggest a Pentecostalism whose liturgical obsession is with a gamut of unseen “forces” (demons, Satan, witches, etc.) that can only be vanquished, and instantaneously at that, with Holy Ghost Fire. At the same time, however, references to hurricanes and tsunamis do suggest an attunement to the global.

There are at least two direct connections to the subject of prayer. First, many of these names, especially the personal ones, can be seen as petitionary prayers in themselves, inasmuch as the names embody the fondest desires and wishes of those who have bestowed or adopted them. In this wise, the child named Prosperity becomes both a petition to God to bless Prosperity and his/her parents, and a way of claiming the said material abundance in advance. Same goes for Success. Rapture is obviously an expression of a desire and prayer by the bestower or adopter not to be left behind when, according to Christian eschatology, the Elect are physically lifted off to the heavens at the appointed hour. Other names (Favor, Answer) can be expressions of a prayer already answered, or a petition awaiting God’s intervention.

A second connection to the subject of prayer has to do with the arrangement of special “deliverance” prayer sessions and recommendation of fasting regimes which are believed to have the power to “revoke the covenants” attached to particular names. In these sessions, the devotee considering or undergoing a change of name is encouraged to study certain passages from the Bible. Two popular exhortatory passages are: Exodus 23:13, “And in all things that I have said to you be circumspect: and make no mention of the name of other gods, neither let it be heard out of thy mouth” (KJV); and Isaiah 62:2, “And the Gentiles shall see thy righteousness, and all kings thy glory: and thou shalt be called by a new name, which the mouth of the Lord shall name” (KJV). I should emphasize the stature of such special “deliverance sessions” as symbolic spiritual performances which aim to extract people from the cosmos of families, ancestors, and the spirit world, relocating them in the “family of Christ;” in short, constructing an alternative (you can call it ‘pure’) filial genealogy now anchored in the Bible.

All in all, part of what emerges here is how prayer itself is a powerfully individualizing force in Pentecostalism. Witness for example how people mutter to themselves for hours on end. And not only do names craft one’s sense of self as a blessed, enlightened, Christ-like individual, but then prayer cements this identity and provides a means through which one is able to contemplate what to do about all the other aspects of one’s ‘old’ self such as food, clothes, and relationships.