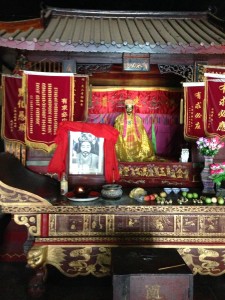 This summer I visited Mianning County (Liangshan Yizu Autonomous Prefecture in Sichuan, S.W. China, only 80 kilometers outside of Xichang, the capital of the Prefecture). On a beautiful mountain, called Lingshan (灵山 or Magic Mountain), one finds a huge temple visited by tens of thousands of devotees during the pilgrimage season. To get to the temple one has to climb the mountain or travel on a mule. As is typical in China, during the climb one passes several temples in a row. The first displays a huge statue of the fat, laughing Budai; there are several other Buddhist temples until one comes to the highest level where there is only a simple shrine with a little statue and the portrait of a Daoist Saint who lived there in the eighteenth century. This is Master Yang (杨祖师爷) who was born in 1748 and died in 1804, and whose body was once kept there in a mummified state until Red Guards removed and destroyed it during the Cultural Revolution in the 1960s. According to the abbot, Master Yang’s ashes and bones are kept somewhere else, but it is unclear when they will be brought to the temple as relic. There is a huge investment in the temple, running into millions of dollars, which according to the abbot comes entirely from devotees. The remarkable thing, however, is that the investment is going into building a Buddhist temple, while devotees come only for the shrine of Master Yang who will fulfill all wishes. They bring huge incense josh sticks and burn them in rows.

The temple is maintained by monks who have been trained in a Buddhist college, run by the state. The Buddhist monastic order seems to be just an extension of the state. Master Yang seems more a Daoist master than a Buddhist monk and was probably an ascetic who combined elements of both religions in a popular cult around his power. The Buddhist monks are more focused on the huge building project that is going on than on the cult surrounding Master Yang, and they effectively suppress forms of possession by Master Yang at the shrine. 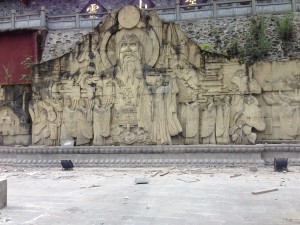 The story of Master Yang, revolving around his kinship with animals (tigers, elks, and mules), is depicted on a large relief. The story of the Cultural Revolution, despite its significance for Master Yang’s mummy, is not included. In the temple, one is told the story of how the mummy had been stolen by thieves who had only been captured after the mummy had already disintegrated. The abbot himself mentioned that the mummy had been taken to another place in order to save it from thieves, but it had started to rot in the heat. Slowly the story of the Cultural Revolution seems to be fading.

People come to pray in front of Master Yang’s image for health, for children, for luck. Their prayer is the main activity and their worship and belief has survived the anti-superstition campaigns of the Communist state. Devotees come to the shrine not for a ‘religious experience,’ but for results. When they have received results they return to thank Master Yang by lighting firecrackers. Prayer here cannot be studied separately from the other things that go on: devotees continue to embrace the traditional belief that there is magical power (ling) on this mountain; they maintain that this power endured even when Master Yang’s body was destroyed. They do not seem to be bothered that the place is being taken over by Buddhist monks with clear support from the state. Many people know that Master Yang’s body was destroyed by Red Guards, but the Communist Party itself has already declared this period to be a black page in history and many people seem ready to turn the page and forget about it, although to establish this definitively would require more research. What counts, however, is the tradition of Master Yang’s power that transcends history. 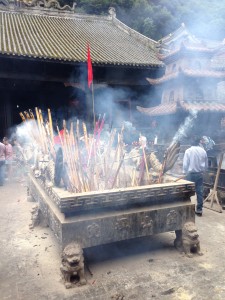 It seems to me that one would get very little out of psychological experiments with Master Yang’s devotees about the intensity of their experience while praying, since neither intensity nor experience is the issue for them. It also seems to me that questions about the cultural relativity of experience are not going to bring us anywhere. Do the Chinese pray differently than Americans Protestants? Yes, because they live in a society with a very different history and culture, and prayer has very different connotations. When translating religious activity with “prayer” we obviously should be careful not to carry over the implicit Protestant meanings of that term to other cultures. The really interesting questions that this case raises, in my view, are not about cognition, but about the history of iconoclasm and the capacity of people to continue to believe in religious power when secular power seems so overwhelming. And, of course, about the popular understanding of the nature of power which blurs the distinction between religious and secular. Not only is communism in many ways a political religion, but also the search for “another China” in the Nobel Prize winner Gao Xingjian’s novel Lingshan (translated as “Soul Mountain,” but “Magic Mountain” would also have been possible, although perhaps too close to Thomas Mann’s Zauberberg) is both secular and religious. Does comparison with other cases in other cultures help? I think it does, since comparison helps to address the blind spots that one develops in one’s research when following the traditions of a particular field. A focus on an isolated and universalized “prayer-as-such,” however, will not produce anything worth knowing.