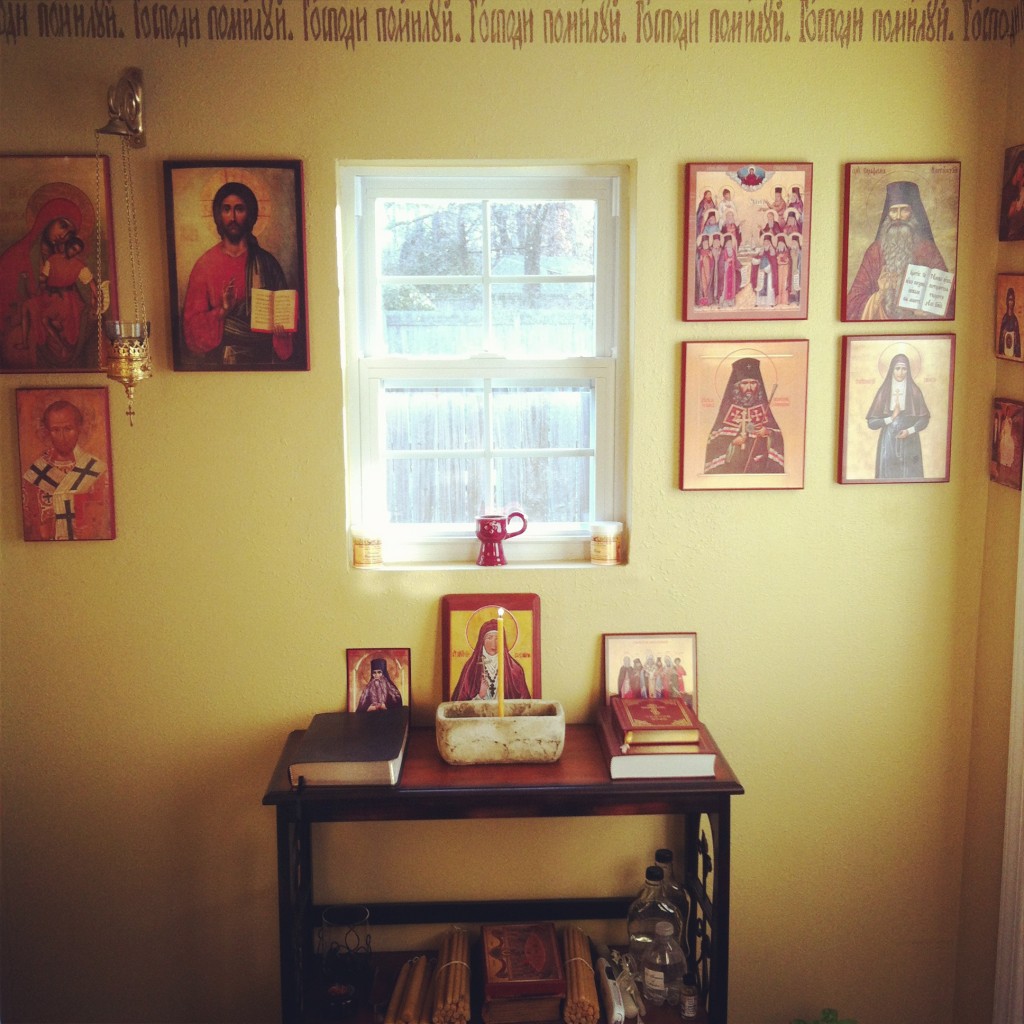 In her curatorial introduction, Sonja Luehrmann acknowledges the importance of aesthetics and materiality, but she ultimately suggests that the most pressing issues requiring investigation are the efficacy of prayer and, possibly, the spontaneity of petitionary prayer. While these are salient queries into Orthodox devotionalism, we want to tease out the importance of the visual and material elements described in the prayer portal, providing another avenue of inquiry that focuses on the objects engaged with and employed during prayer, and how religious stuff aids the configuration of Orthodox identity—religiously, socially, and ethno-geographically. Rather than seeing efficacy as a uniting principle among these fine essays, we see the materiality and visuality of prayer as the most vital part of this portal. Indeed, the material holy is one of the central tenet upon which Orthodox prayer is founded, harkening back to key councils and writings of Orthodox saints and theologians who defended the material and visual nature of prayer, championing the use of icons as tactile and ocular means of fabricating portals of communication with the heavenly realm.

As Anderson Blanton notes in his portal, “The Materiality of Prayer,” the tactility of prayer accessories provides believers with haptic and visual relays, allowing communication between the sacred and themselves. In the course of Sarah Riccardi’s ethnographic research among believers at “Theotokos” Unexpected Joy Orthodox Church, a parish located in Ash Grove, Missouri, a small town in the rural Ozarks, she has observed that interlocutors will often discuss the vitalness of the imaged and the importance of the tactile in their prayer lives. Specifically, they say that the imaged and the tactile serve for them as means through which they feel more connected to Christ and the saints, both emotionally and, in terms of proximity, spiritually and spatially. One parishioner explained that she sees and senses St. Herman of Alaska in her home, and she links these visitations to her deep devotion to the saint’s life and the presence of his icon in her living room icon corner.

Orthodox prayer is, in part, composed of haptic and visual elements that are essential in helping practitioners focus on, relate to, and interact with celestial members of their communities during devotional activities and prayer. These relay portals allow access to the extended family of Orthodox Christians, living and dead, humans and saints, thereby strengthening religious, social, and familial bonds. Using materiality, practitioners continuously create and reimagine social networks of Orthodox believers, forming and renewing relationships and connections with other members of the group. In this socio-religious assemblage, practitioners and saints engage in complex social and personal relationships that are acted out and manifested during devotional prayer, with each actor (divine and human) conversing with, influencing, and affecting the others.

As Vlad Naumescu and Simion Pop note in their portal entries, objects, prayer books, and akathist booklets become present participants in the prayers of individuals, functioning not only as mediators in the networks of believers, but also, to borrow from Bruno Latour’s understanding of actor-network theory, as actors who participate in the ongoing reframing of relationships between the practitioners and the celestial realm. Religious stuff not only transmits holy grace, it brings with it the potential for real encounters with saints in the daily lives of practitioners. In this way, Orthodox devotions, like those of Catholics, provide practitioners with deep and meaningful relationships with members of the celestial and terrestrial realms, using religious stuff as media for connectivity. Orthodox prayers are not static; rather, they are gateways to constantly evolving intersubjective bonds between the supplicant, God, and the saints.

All the entries in this portal acknowledge the relationships between Orthodox believers—living and deceased—and, to some extent, the facilitory nature of the material holy. However, they generally focus on the efficacious transmission of the prayer to the celestial counterparts rather than questioning why and how the material components aid prayer-based intersubjectivity. Angie Heo, in her essay on prayer and iconography among Coptic Christians, notes not only how vernacular devotions to a saint help him live on in the religious imaginations of believers, but also how images are both employed and destroyed as part of the prayerful memorialization of the departed saint. Heo’s narrative, as well as several more by other members of the portal, point briefly to the material components of prayer as access points for experiencing the saints and Christ. Working off of Ian Hodder’s exploration of the relationships between humans and objects, our work acknowledges that the religious stuff employed during Orthodox devotions is not inert; rather, these objects, possessing agency, take part in a dependency exchange—one that offers glimpses into how objects become key players in the lives of Orthodox Christians, providing encounters with the holy.

Icons and relics of the saints help manifest their presence in tangible ways, enabling, as Robert Orsi suggests, “encounters between humans and supernatural figures.” Indeed, Luehrmann nods to this idea in her curatorial introduction: “[H]ere is a common idea that images mediate the real presence of saints and divine beings who are alive in the Church as a transhistorical community.” These encounters, the real presence of the saints, are mediated by the material holy—from icons of Christ and the Theotokos, to holy oil from the shrine of St. John Maximovitch in San Francisco, to water from the miraculous spring on Spruce Island in Alaska, to dirt from the grave of St. Herman (an American Orthodox saint), to recordings of choirs from Orthodox seminaries, to prayer books ordered online from Russia, to incense crafted in Lebanon—allowing practitioners tactile, visual, aural, and olfactory relay portals to the celestial realms of believers. These “apparatuses of belief,” as Anderson Blanton suggests in his research on Christian healing, bring about experiences with the sacred, shifting practitioners’ perceptions of ‘the real.’

In his fieldwork at St. Athanasius Antiochian Orthodox Church in Goleta, California, Aaron Sokoll finds that his interlocutors, often American converts to Orthodoxy, believe that sensory objects, especially icons and hymns, provide devotees with altered perceptions of space, and distance—temporally and spiritually—between the human and the heavenly. Parishioners refer to these shifting and vital perceptions as ‘real’—real connections—referring to human-to-heavenly connections, as well as human-to-human interactions. In the sensations of prayer, these devotees feel, see, and hear the presence of celestial beings and (all) other Orthodox Christians. This perception of the ‘real,’ namely the presence of the divine and human religious community, is also an affirmation of one’s faith. One parishioner related to Aaron that as he prayed in front of an icon of Jesus he was overcome by a sense of the “real presence of Christ,” and he perceived that “Christ was right there,” which caused him to mentally exclaim: “Wow, this is really real.”

These real connections with the heavenly realm have earthly, political implications as well. At a recent Great Vespers service at St. Athanasius, Aaron observed a special prayer for the people of Syria. An icon of St. Thekla (the patron saint of a convent in Ma‘loula, Syria), donated by a Syrian parishioner who relays news from her family in Syria to the parish, was displayed, serving as a physical point of connection between the people of Syria and the parishioners in Goleta. This further emphasized the Metropolitan’s call a few days prior for not only special petitions offered to spiritual powers but also for petitions to political powers in order to avoid military intervention by the United States. In this situation, the icon of St. Thekla offered the believers gathered an efficacious visual and haptic relay portal transmitting their prayers to the saint and, by association, to the Orthodox Christians suffering in Syria, thereby strengthening the identifying socio-religious bonds with the Syrian Orthodox community. 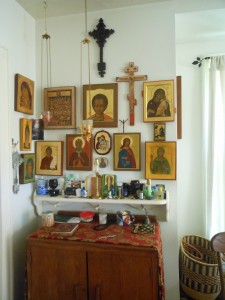 In addition to serving as meaningful objects for personal devotion and tactile and optic relays for connections across time and space, religious stuff is an embedded part of Orthodox culture, a commodified form of spirituality that unites the local and global community of believers through gifting and commerce. The material components of prayer are often gifted to practitioners for religious life events, such as baptisms and weddings, enforcing bonds between believers while simultaneously aiding the devotional practices of devotees. The purchasing of religious stuff for use during prayer also affects the cultural poetics of identity among believers through the selection of items associated with particularly ethnic forms of Orthodoxy. These selections reinforce, strengthen, and even fracture understandings and formations of the Orthodox self. Essentially, prayer in Eastern Orthodoxy is not a stand-alone practice; rather, it is a vital part of practitioners’ communal and individual lives, and is deeply embedded within the structure of Church, affecting and affected by many factors.

We hope that this response makes clear both the rich material and visual accessories of Orthodox prayer, and how Eastern Orthodoxy can provide a sensory lens through which to reframe current conceptions of prayer in American Christianity. Despite geographical boundaries and ethnic disparities, Orthodoxy is a faith united by lived theology and highly-developed material cultures and ritual practices, together creating a distinct religious tradition that possesses inner continuity, while being ethnically, geographically, and socially diverse. Orthodoxy, particularly in America, offers manifold areas for research, but none that are more vital than the intersection of visual and material culture and prayer. This is primarily because of the wide-ranging implications here for better understanding the sensory cultures of Christianity, the ontologies of celestial beings, the emotional, psychological, and economic components of religious praxes, and the formation and maintenance of socio-political identities among convert communities and ethnic enclaves. Exploring the relationships between practitioners, holy objects, and the celestial realm in Eastern Orthodox prayer offers researchers a space to better understand the dynamic interactions that transpire somewhere within and beyond practitioners’ everyday lives.