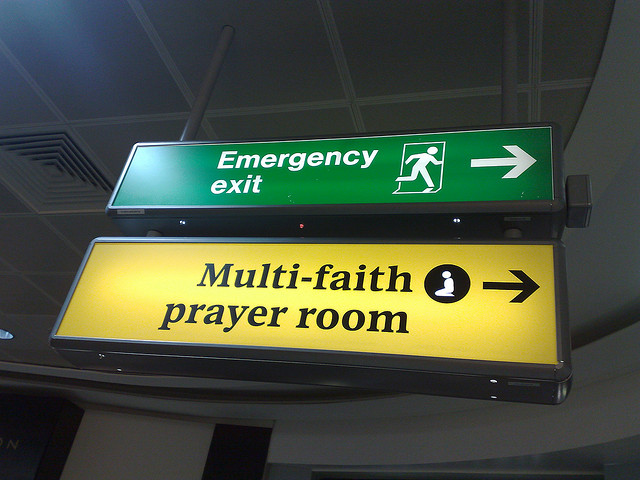 Andrew Crompton writes that “the most common and characteristic type” of multi-faith space, including in airports, is a “windowless white room with a few religious texts on a shelf and the paraphernalia of religion, when not actually in use, kept out of sight in boxes.” “Empty white rooms have become the default solution” to the building problem for architects: how to create a place for people of many faiths to worship. In contrast to many mid-century modern buildings where empty spaces connoted a universal sense of the holy, and even in contrast to earlier examples of airport chapels, the iconoclasm of airport prayer rooms is not a “positive” vision of what multi-faith entails. It is, rather, a default, whereby architects try to prevent these spaces from being “meaningful in an inappropriate way.”

One wonders whether the ubiquity of such rooms in airports throughout the world nonetheless has some positive value. Their familiarity might present travelers a comfort of its own. In other words, while these simple airport prayer spaces may be an “afterthought,” they are quite similar kinds of afterthoughts.

It is worth considering how these otherwise empty rooms, devoid of any apparent meaning, are nonetheless responding to a particular kind of praying traveler – one who moves through the world (and the airport) as a person whose prayer is not brought on by the demands, anxieties, or existential issues of travel, but by of the obligations of a faith that does not change, no matter the ground on which the traveler treads.

Alain de Botton obliquely raises these issues in his essays regarding a week in the life of Heathrow’s Terminal 5. He visits the multi-faith prayer room in a corridor off the security screening area, a “cream-coloured space holding an ill-matched assortment of furniture and a bookshelf of sacred texts,” and observes a family paying “their respect to Ganesh,” presenting the deity with “some cupcakes and a rose-scented candle.” This leads him to reflect, briefly, on what prayer is doing at an airport at all – a position that emphasizes the more existential aspects of travel:

The sheer remoteness of a catastrophic event occurring invites us to forgo scientific assurances in favour of a more humble stance toward the dangers which our feeble minds struggle to contain. While never going so far as to ignore maintenance schedules, we may nevertheless judge it far from unreasonable to take a few moments before a journey to fall to our knees and pray to the mysterious forces of fate to which all aircraft remain subject and which we might as well call Isis, God, Fortuna or Ganesh.

De Botton’s emphasis on the anxieties of flying, and the uses of prayer rooms to supplicate the whims of fate or the divine, stand in contrast to what most commentators on airport prayer spaces focus upon. The small empty rooms emphatically do not speak to the particularities of the airport, the existential issues that many travelers mask with anti-anxiety medication or a stiff drink before boarding. These spaces speak, in their emptiness, to a religious world that is organized via distinctions and possible offense. They present nothing to those travelers who may seek, if for a moment, to consider the rapture, joy, and terrors that have accompanied travel through the air to remote or novel encounters.