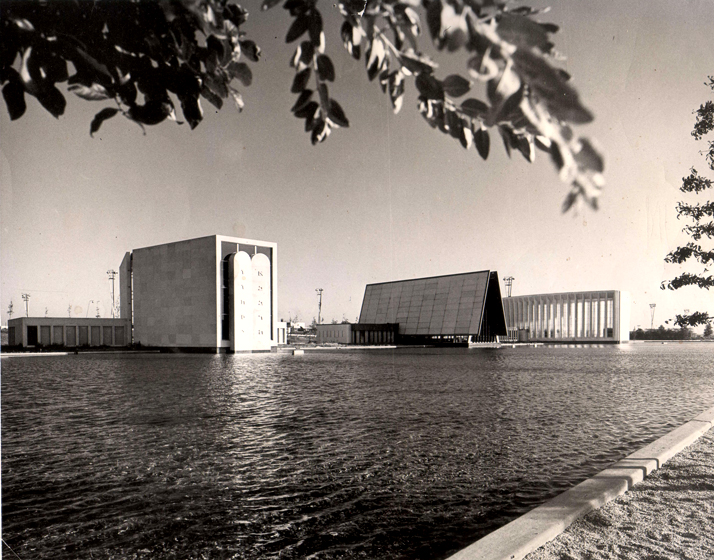 It is hard to imagine a time when air travel was more leisurely and non-securitized than it is now. But in the not-too-distant past, John F. Kennedy Airport in Queens, New York was known as Idlewild International Airport, and it had a “Tri-Faith Plaza” where airline visitors could visit and pray at one of three free standing chapels aligned along the edge of a large reflecting pool near the airport’s main terminals.

Idlewild’s first chapel, Our Lady of the Skies, was built in 1954 by the Diocese of Brooklyn. When airport expansion and a new terminal required its demolition, the Port Authority of New York made room for a Tri-Faith Plaza. The new, light-filled Our Lady of the Skies chapel opened in 1966, adjacent to a Protestant chapel commissioned by the Council of Churches of the City of New York and a Jewish chapel commissioned by the Board of Rabbis International Synagogue. Each of the three chapels was set in part over a large reflecting pool that visually united the diverse buildings. (The pool was found to attract birds, and was soon drained.) Each chapel was staffed by the appropriate religious leaders, and held services on a regular basis. Services were attended by passengers and airport employees alike.

Old photographs of the plaza present a clear image of the long-departed era when air travel was exciting and ennobling—or at the very least, pleasurable. The chapels stood free of barriers, checkpoints, or security agents: walking or driving from the chapel to the terminal was certainly not a challenge. One can imagine passengers extending their time at the airport, perhaps visiting the chapel before a lunch at a restaurant near the gate. Moreover, each chapel’s soaring interior space and ample use of light and stained glass evoked an inspiring connection between the skies of the jet-age and the heavens of the Bible. Our Lady of the Angels was a popular spot for weddings (more than one thousand were performed there).

The arrangement of these chapels within their Cold War buildings also suggests an alternative articulation of the “tri-faith” impulse that took shape in many other ways. In this case, the “three great religions” of America stood side by side, equal in size if distinctive in shape. Symbolically greeting the international visitor to the United States, they expressed vision of religious plurality and harmoniousness that seemed true to the cosmopolitan times.

This vision has continued to live on, in modified form, at John F. Kennedy International Airport, where each of the chapels is now housed in its own distinctive room and have been joined by a fourth, “multi-faith” prayer space. The three distinctive chapels of the Tri-Faith Plaza were demolished to make room for parking and access roads in the late 1980s, and were promised space in Terminal 4. Long delays kept the new religious corridor in international departures from opening, and for more than a decade all three groups shared the same space. The new chapels finally opened in 2008, to much fanfare and with appropriate blessings by various religious leaders.

These new airport chapels blend seamlessly into JFK’s highly securitized shopping mall aesthetic. How have prayers changed in this transition? How do travelers today understand or use these chapels? What, if anything, happens to prayer when it is architecturally linked to other needs and services—a bottle of water, a quick massage, that glossy magazine—that travelers are encouraged to “grab and go?” Conversely, how does the presence of prayers in these spaces shape the experience of this contemporary site of transnationalism and cosmopolitanism?