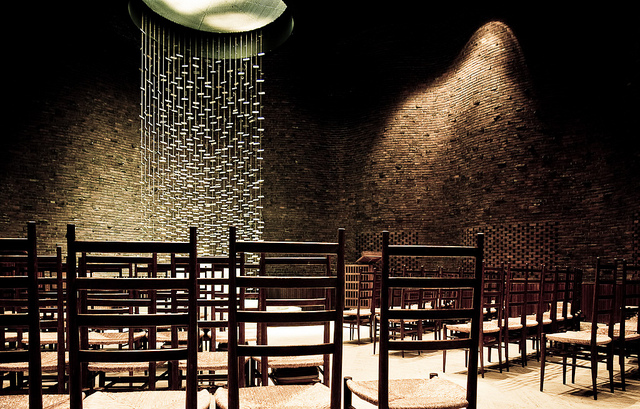 The MIT Kresge Chapel was commissioned and built in the 1950’s by the prominent designer and architect Eero Saarinen. The chapel, a cylinder with an interior lit by a skylight- oculus and ambient light reflected by an exterior moat, is a stunning architectural work. It was intended from the beginning as a non-denominational space for students to worship.  The atomic age ushered in new public concerns about the moral education of future scientists and engineers, which the Institute addressed by commissioning the chapel and its paired (and much larger) Kresge Auditorium. Together, they were designed to make space for the cultivation of students’ religious, cultural and civic experience, notes Margaret M. Grubiak.

What kind of prayer did Saarinen think would take place in the chapel? Saarinen writes (in Foxe 2010):

These spiritual feelings were familiar to Saarinen, at least insofar as he could draw from his own student days and his own experiences.

I have always remembered one night on my travels as a student when I sat in a mountain village in Sparta. There was bright moonlight over head and there was a soft, hushed secondary light around the horizon. That sort of bilateral lighting seemed best to achieve this other-worldly sense. Thus the central light would come from the altar – dramatized by the shimmering golden screen by Harry Bertoia – and the secondary light would be light reflected up from the surrounding moat through the arches.

Despite the emphasis on true non-denominationalism and shared spirituality, Saarinen’s chapel has not been used in these ways. The Religious Life center at MIT uses the chapel for many activities, including a weekly Tuesday morning “gathering to reflect, pray and mediate.” But Foxe notes that the orientation of the interior space is not conducive to some group worship:  Jewish and Muslim student groups do not currently worship there, and many Christian groups also worship elsewhere. Its striking and widely lauded architectural features seem to speak more clearly about the mid-century desire for a shared conception of the sacred than to contemporary practices.