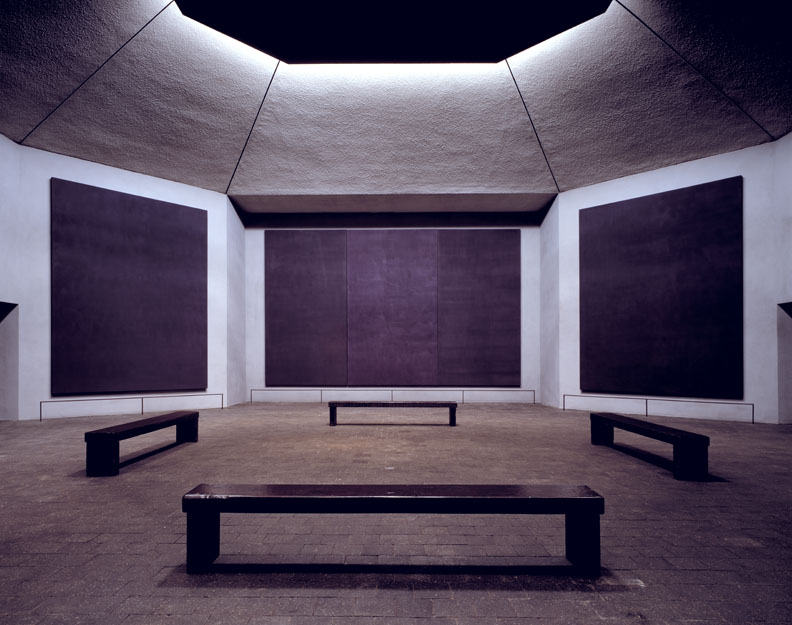 “In this environment, many people find peace, and some become attuned to the invisible, to the supernatural, to God,” remarked Dominique de Menil in a 1990 address. She was speaking of the Rothko Chapel in Houston, which Dominique and her husband John, art collectors and philanthropists, had commissioned for the campus of St. Thomas University in Houston Texas. The de Menils approached Mark Rothko in 1964 to paint site-specific canvasses for a chapel, which was to be designed by Philip Johnson. Rothko and Johnson’s disagreements over the building’s design ultimately led the de Menils to ask Houston-based architects to complete the building, which opened in 1971.

The de Menils were socially progressive French Catholics who emigrated to the United States during World War II and settled in Houston. Strongly influenced by lifelong friendships with priests and theologians who advanced “Catholic modern” aesthetics and social ethics in their teachings, the de Menils, who had made their fortune in oil, sought to build institutions that would embody and advance these aesthetics to a wider and more diverse public. When the administration at St. Thomas ultimately decided not to accept the Rothko Chapel designs, the de Menils moved their plans to a new space, and the Chapel became decidedly non-denominational.

The opening of the Chapel in 1971 made this explicit, as invitees who gathered for the dedication included members of numerous religious traditions. Dominique de Menil’s remarks focused not on the multiplicity of attendees, however, but on Rothko’s art works and the “message” that they convey “without images.” As she said:

Images, which were never acceptable to Jews and Muslims, have become intolerable to all of us today. It may be an important sign that we cannot represent Jesus or his apostles anymore. Any representation that is not naïve is unbearable…. Nobody is visually naïve any longer. We are cluttered with images, and only abstract art can bring us to the threshold of the divine.

Dominique and John de Menil were not unique in their visions about the power of abstract art to serve as a tool for mystical contemplation, extending and transforming the power of iconic presences into new, post-symbolic realms; liberal Protestants and Jews were also mining these concepts for new types of church buildings in the 1960s. But, by extending the power of modern, abstract art past the confines of Protestant, Jewish, and Catholic liturgical reforms and into a new ecumenical space, the de Menils’ interpretation of the Rothko Chapel destabilizes the utilitarian and pragmatic claims that modern multi-faith architecture is religiously neutral. As they viewed it, the proper construction of modern space and use of abstract, non-symbolic art would pull those who would stop to look and silently contemplate that art into the “threshold of the divine.” Abstract art, in their vision, is not a backdrop for the general but a new tool and technology for prayer – itself a mechanism that moves modern people toward a more pure, more intense and intimate experience. If nothing else, this claim (along with the testimony of many visitors to the Chapel of these effects) prompts us to reconsider the understanding that modern modular multi-faith is made up of blank spaces that tell those who use them nothing about how to pray.