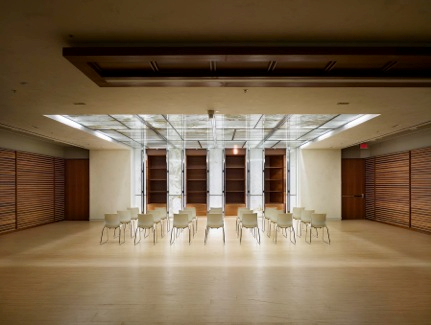 Designed by a young architectural team who transformed an unremarkable office building into a striking architectural space, the University of Toronto Multi-Faith Centre opened in 2007 to much acclaim. Images in newspapers and publicity stressed the architects’ interests in creating a set of beautiful and flexible spaces that could both serve and inspire the University’s highly diverse religious communities. The building, located on campus, includes a meditation room with a “green” wall, set-aside space for ritual washing, kitchens, several small conference and quiet rooms, and a large and light-filled activity hall.

Flexibility was, and remains, a key drawing point of the building. When architects gave a number of scholars of religion (myself included) a tour in 2007, they stressed the ways that the multi-purpose room could be transformed into use in any configuration, how its paneled walls revealed storage space for the accouterments of diverse religious ceremonies, and how ventilation would quickly remove the lingering smell of smoke or incense to allow for rapid turnover.

More so than many of the older buildings in this portal, the UT Center was designed with a vision that it would (or could) be used by Muslims, Hindus, Jews, Christians, Buddhists, and others. The chaplain who currently manages the building attests that it performs this function well. The building is in constant use, with students and others from multiple groups sharing the space. Its successes notwithstanding, the chaplain noted that the architects did not fully anticipate how the building would be used. In particular, he bemoaned the quick deterioration of the beautiful and expensive wood floor in the main hall—a casualty of many religious celebrations involving food and eating. Nor, he said, did the architects envision the importance of sound equipment for many of the groups who use the building (and the related need for ample locked storage space when amplifiers and instruments were not in use). While no one expects religion to be quiet and solemn, it may well be that the long architectural and modernist history of designing multi-faith sites for “quiet reflection” played a role in shaping the vision for this most modern multi-faith building. No matter, the denizens of the UT Multi-faith Centre have learned to make the building work for them.