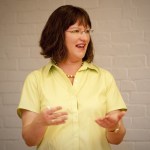 Elizabeth McAlister is a Professor of Religion at Wesleyan University in Middletown, CT. Her research focuses on Afro-Caribbean religions, transnational migration, neo-Pentecostalism, and race theory, with a focus on Haiti. McAlister is author of Rara! Vodou, Power and Performance in Haiti and its Diaspora, a book and CD (University of California Press, 2002) that is an ethnography of a musical, religious, and political festival. Her second book, Race, Nation, and Religion in the Americas (Oxford University Press, 2004) is a volume co-edited with Henry Goldschmidt, which theorizes race and religion as linked constructs. McAlister has produced albums of Afro-Haitian religious music: Rhythms of Rapture, (Smithsonian Folkways) and Angels in the Mirror (Ellipsis Arts). Her current research examines the rise of the New Apostolic Reformation, or “Spiritual Warfare” movement and its global networks, particularly in the circuits between the United States and Haiti.

Reflecting on what it means to approach the study of prayer as a practice, I immediately asked myself, what does studying prayer as a practice NOT mean? It does not mean that we want to study the prescriptive, the orthodox laws and formal prayers written by religious authority, since we want to study the way prayer is practiced and not the way it is prescribed to be practiced.

In January of this year, the speaker of the Kansas House of Representatives forwarded an email message urging supporters to “Pray for Obama: Psalm 109.8.” That scripture reads, “May his days be few; may another take his office,” and was in fact “praying against” Obama.