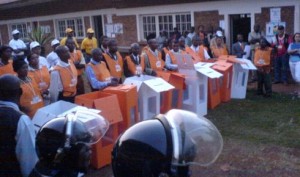 It’s difficult to make sense of the reactions of many Western governments and international actors to the disastrous elections in the Democratic Republic of the Congo (DRC) on November 28, 2011. Initial responses from the United States and the European Union were muted, and Belgium later congratulated President Joseph Kabila on his reelection. As the extent of fraud and lost votes have became clearer, some governments have come out with stronger criticisms of the elections. US Secretary Clinton was “deeply disappointed,” while EU High Representative Catherine Ashton echoed Clinton’s assessment and said that the EU would “re-evaluate” its cooperation.

Yet today, both Western responses to the elections and their policies are unclear and tending dangerously toward the status quo of the last five years. The US Government, according to some, is very divided on Congo, and its public representatives have recently provided cautious statements on the elections and their aftermath. Consumed by their own economic troubles, no member of the EU has the interest to take the lead on reconsidering Europe’s Congo policy, while the UN stabilization mission in the Congo (MONUSCO) wants to move on from the elections and renew its focus on civilian protection.

However, these signs of policy inertia could prove disastrous, since Western policies have so far done little to strengthen Congo’s governance, a key goal of many bilateral programs. While the Congo’s GDP growth for 2011 was just under seven percent, Congo dropped to last place in the UNDP’s latest Human Development Report, and its business environment, dominated by the corruption-laden mining industry, is considered one of the worst in the world. (It is telling of the personal nature of business in Congo, for instance, that the death of key Kabila-adviser Katumba Mwanke in a plane crash on 12 February has left foreign investors worried.) Above all, the 2011 presidential and legislative elections, which were an important indicator for the state of democratic governance in the country, were so compromised that the final results are called into question.

As the members of Western donor countries continue to discuss their next steps, they could do worse than heed the recommendations of the Congolese people themselves, who already have provided useful but thus far disregarded recommendations on addressing Congo’s botched polls. Both civil society groups and the bishops of the popular and deeply influential Congolese Catholic Church, which deployed some 30,000 electoral observers, have called for the current national electoral commission (CENI) to correct its grave mistakes or to resign.  Since the CENI has shown little incentive to reform, donor countries could request that the current CENI members resign and that a newly reconfigured CENI with civil society members be created, with a universally accepted CENI president—a move similar to the reforms in Nigeria after its 2007 elections.

Loosely following the recommendation of the main opposition parties, donor countries could also press for a recount of the legislative elections. The current legislative results for the 500-seat parliament are being fiercely contested in the Supreme Court, but the Court’s competence to treat some 500 complaints is suspect, given its limited staff and space and President Kabila’s last-minute appointment of eighteen new judges in the middle of the electoral campaign. Guided by a newly reconstituted CENI, Congolese officials could call for a review based on the hard copies of the poll results from each electoral district. In cases where the winner is called into question, the CENI could then call for a re-vote in those districts at the same time that it holds the provincial elections, scheduled for later this year. This won’t legitimize the electoral process, but it could at least salvage part of the process and pave the way for an independent and legitimate legislature.

Another overlooked recommendation from Congolese is the call for an inclusive national dialogue among all major parties, a recommendation that the largest civil society electoral platform has proposed. While attempts at an inclusive dialogue can quickly devolve into a useless talk shop, a real dialogue where senior members from all major parties and coalitions are forced to address their greatest differences could prepare for a better electoral climate in future polls and diffuse the volatile atmosphere that characterized the November 2011 elections. No such regular meetings occurred during the 2011 electoral period, and the campaign rhetoric was all the more strident because of its absence.

Of course, these recommendations will carry even more weight if the Congolese themselves show their support. So far, the myriad declarations and press conferences from politicians and civil society and religious leaders suggest that they want tougher stances from international partners to address the current political crisis in Congo. But if more indications are needed, the pro-democracy march in Kinshasa planned for Thursday, 16 February, 2012, might well be the sign.

2 Responses to “For Next Steps in Congo, Listen to the Congolese”