Language is critical to the ability to mobilize. The group feeling that was activated in the urban hubs of North Africa in 2011 was manifested in an identifiable language and iconography of collectivity. In many ways, language itself can consolidate people into crowds. The language of political crowds in Tunisia in 2011 opposed the language of dictatorship that had long divided and isolated the population. In Crowds and Power, Elias Canetti underlines the importance of language in the formation of crowds, where the symbolic destruction carried out by the revolutionary crowd aims to put an end to the system by taking down its symbolic representation. “The destruction of representational images is the destruction of a hierarchy which is no longer recognized. It is the violation of generally established and universally visible and valid distances. The solidity of the images was the expression of their permanence…never before had it been possible to approach them with hostile intent. Now they are hauled down and broken to pieces.”[i] One sees in the crowds of North Africa the repeated phenomenon of images of the rulers (Mubarak, Ben Ali, Gaddafi) torn down, defiled, written over with graffiti, burned and tossed on garbage heaps. This destruction of symbolic images is the collective language-action of the crowd.

In Tunisia, the dictatorship had long produced a separation of the population into oppositions of which we can highlight three: urban/rural, secular/religious, and state/society. The Ben Ali regime produced these divisions to weaken the population by means of a political discourse of modernity and secularism that emphasized the superiority of the secular over the religious, the urban over the rural, and the state over society. I will briefly focus here on one of these oppositions, the urban/rural, and how the crowds in Tunisia rejected this opposition through a language of unity.

The Tunisian crowds of January 2011 showed a heightened consciousness of the dictatorship’s linguistic manipulation and used a language of unity that destabilized the dictatorship’s social dichotomies. The division of the urban and rural regions was overcome through the virtual unity of people on Facebook and Twitter. Parallel to this virtual community was the visible unity of rural and urban populations in the streets of Tunis. The language used by these crowds expressed a rejection of a politics and language of division. This was achieved through a direct and collective language of solidarity, the reclamation of social space by both rural and urban populations, and the iconographic marks that covered the walls of the city. The crowds, because of their heightened consciousness of the way that the dictatorship used language to separate them, deployed a counter-articulation that subverted the language of oppression.

A discourse of “primitivism” to describe the rural areas was endemic in Tunisian political language. The discourse of Tunisia’s urban/rural dichotomy is the product and instrument of decades of oppression and marginalization of the rural areas by the politics of the political center in Tunis. This policy served to buttress a specific political project of modernism and secularism, in a language that privileged the urban, secular elite. This pattern of exploitation and isolation of rural areas began under Ottoman rule and continued under French colonial control. For example, in 1897 the French established the CPG (Phosphate and Railroad Company) that created divisions between tribes in the region of Gafsa to further the exploitation of natural resources for the pecuniary benefit of urban, Tunis-based elites. This type of division within rural areas and between the rural areas and the capital continued during the regimes of Bourguiba (1956-1987) and Ben Ali (1987-2011). Disappointingly, the interim governments (January 14, 2010-October 23, 2011) for the most part redeployed this language of separation between rural and urban Tunisia. Complaints about the rural/urban dichotomy in the months after the 2010 – 2011 revolution have come from the people in the region of Kasserine, where I heard many express that their lives continued to be neglected in the same way as before the revolution.

Indeed, the post-revolutionary period has seen a repetition of the Constitutional Democratic Rally’s (RCD) tactic of fomenting tribal conflict and marginalization of the countryside as a means to strengthen the political center. During the transitional period (January 14, 2011-October 23, 2011) the socio-economic problems of rural areas was glossed over as primitive, tribal, and insignificant. In the press, no details of rural conflicts were ever given, and were explained as “tribal conflicts.” The cause of discontent in the impoverished region is dismissed because of the economic benefits the town provided for the center.  In response to the July 2011 protests in El Ksar, Medhilla, and Metlaoui, an envoy of the interim government’s Ministry of the Interior, Mohamed Lazhar Akremi, stated that “the legitimacy of the demands of the region’s inhabitants can in no case excuse the blockage of economic activity in the region.”[ii]

Real demands for economic equality and justice are spun through a language of primitive, tribal disputes. According to the TAP (Tunisie Afrique Presse), tribal violence in the region of Metlaoui has been ignited by rumors that the State will allocate jobs according to tribal lines in the region where the phosphate mines are located.[iii] The incidents were also described by the French press as tribal clashes. “Violent clashes between rival tribes led to 11 deaths and more than 100 injured in three days in the mining town of Metlaoui in the south-west of Tunisia, indicated a source authorized by the Minister of Interior Sunday night on the AFP.”[iv]  To date, there is no analysis into the causes of the social problems at the root of these clashes. They are reported as vaguely documented facts resulting from “tribal” and “violent” cultural practices that allegedly typify the countryside. This discourse, prevalent under Ben Ali and continued by the transitional government, opposes a violent, bloodthirsty tribal culture and its irrational crowds to the stability and rationality of modern urban culture. Continuous with the language of Ben Ali’s dictatorship, the countryside continues to be marginalized in favor of the seat of political power in Tunis. Because of this, the continued use of dictatorial language separates the rural from urban Tunisia.

The Language of the Revolutionary Crowd [v]

The language used by the crowds during the Tunisian revolution subverted the linguistic binaries of the dictatorship. Its language united people against the separations established by the common political discourse. The revolutionary crowds asserted the unity of the population, both rural and urban, against State oppression. The crowds were written over with words expressing the shared sentiment of the people. The events of 14 January and of Kasbah I and II , mass gatherings during the weeks after the flight of Ben Ali, in Tunis defied the politics of a rural/urban split when the populations from the central and southern regions came and occupied the center of political power, using a common language and holding the same signs. Che Guevara’s face was everywhere on the walls and streets, as well as names of the regions where the demonstrators came from to join the Kasbah movements: Gafsa, Kasserine, etc. During the mass occupation of the streets, names of the regions which the protestors came from were written in graffiti. The countryside had come to the city and inscribed its presence on the walls of Tunis. 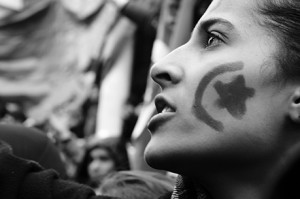 People put the symbols of the Tunisian nation on their faces. Others draped the Tunisian flag over their bodies and held signs declaring the nation as theirs. Freedom was a word written on the bodies of all, regardless of their region or situation. In the appropriation of public space of Tunis by all regions of Tunisia, the streets became spaces of meeting and unity marked by graffiti. The Kasbah became a truly public space where it was possible to write: “Merci le peuple! Merci Facebook!” “We were all screaming ‘dégage’ with one voice,” writes “Tunisian Girl” on her blog about the demonstrations of 14 January. The people spoke with one language, one voice, using one word to express a common desire of the unified crowd. Even little children were among the crowds. One girl’s forehead read, “Army, I love you,” showing the unity of the army with the Tunisian people.

I write these words in Tunis on December 17th; exactly 2 years after Mohamed Bouazizi set his body on fire in Sidi Bouzid. In some ways, Tunisia looks very much the same today with the poor, the youth, and the rural populations in a state of neglect. But the crowds of today are quite different than they were in January of 2011. These days partisan, sometimes fanatic, and quite desperate crowds form in a very different and more isolated social landscape than the revolutionary hopefulness of last January. Many people here wonder about that crowd solidarity and unity of purpose that brought the people together during those days, and where it might have gone.

Both photos were provided by Manuela Maffioli, a photographer from Tunis.