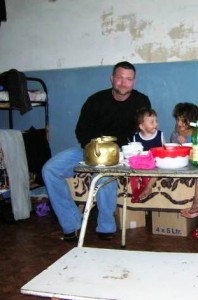 Attitudes in Transition: War, Displacement and the Roots of Political Violence in Chechen Refugee Communities

Dr. Dennis’ dissertation, “Attitudes in Transition: Displacement and the Roots of Political Violence in Chechen Refugee Communities,” examines the factors that drive refugees displaced by war to hold attitudes supporting violence to achieve political ends. The conventional wisdom suggests that refugee camps are breeding grounds for the emergence of political violence, terrorism, and radicalism. Yet, the literature on refugees and political violence offers little empirical evidence of such a connection or systematic investigation of the root causes of attitudes toward political violence among refugees.
The prevailing belief is that younger generations of militants in protracted insurgencies are more radical than their elders. However, this is not the case with displaced Chechens. Initial evidence suggests the older generation is now more likely to desire maximal goals, like the establishment of an Islamic Emirate in the Caucasus, and support religious authority (sharia) as political authority. Conversely, the younger generation of Chechens is less interested in global jihad or any pan-Caucasian political unit. This puzzle merits further inquiry. Understanding the conditions under which generational political shifts occur in insurgencies can help better inform foreign policy decision-makers.

Title VIII funding has allowed me to further explore the nexus between academic research and policy formation. It has given me the opportunity to share my work with both policy professionals and fellow scholars conducting research on related issues in similar regions. Overall, my work and development as a researcher and scholar owes a great deal to Title VIII.

Michael Dennis received his Ph.D. from The University of Texas at Austin in 2011. His dissertation explores the relationship between displaced communities and the support for political violence and insurgent activity. Dennis spent nearly three years conducting fieldwork in Chechen refugee communities in The Republic of Georgia, Azerbaijan, Poland, and Belgium. His work has been funded by the Social Science Research Council, Fulbright, Fulbright-Hays, FLAS, and IREX. Prior to entering university, Dennis was a member of the United State Marine Corps and served on expeditionary campaigns in Somalia and Rwanda. In his spare time he plays rugby for the Austin All-Blacks. 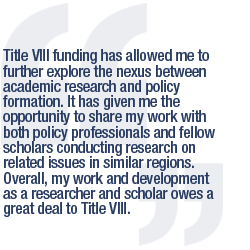