The city of Łódź, or the ‘Polish Manchester,’ was one of the main industrial hubs of the late Russian Empire, growing at exponential rates in the last quarter of the nineteenth century. With Jewish and German industrialists and Polish workers, Łódź’s ethnic and religious diversity set it apart from Warsaw, the Polish capital. Its rapid growth, coinciding with a period of harsh Russification, left little opportunity for the development of intellectual life or political infrastructure. Instead, a cast of charismatic clergymen emerged as a primary leadership force, championing the social needs of Łódź workers. Religion as a form of organization remained compelling in Łódź in an age of new ideologies and mass politics. Chronologically, this dissertation traces the development of ethnic and religious identity in Łódź, and in Poland as a whole, over several episodes of economic crisis: from the Łódź strike of 1892, the first general strike in Russian Poland, to the Revolution of 1905-7. In a broader sense, this dissertation is a narrative of imperial modernization. Łódź, the third largest producer of textiles in the empire, became central to conversations regarding Russia’s industrial growth and its adherence to Western models of progress. 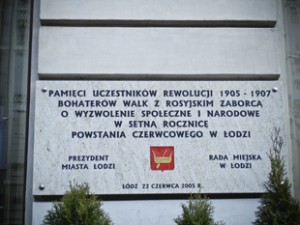