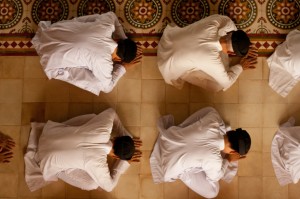 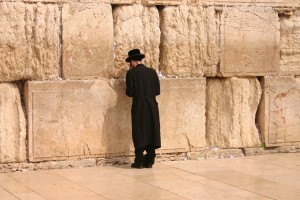 Reflecting on what it means to approach the study of prayer as a practice, I immediately asked myself, what does studying prayer as a practice NOT mean? It does not mean that we want to study the prescriptive, the orthodox laws and formal prayers written by religious authority, since we want to study the way prayer is practiced and not the way it is prescribed to be practiced. To keep the object of inquiry on the practice of prayer will change the way we think of prayer, since so much knowledge of prayer is really knowledge of prayer as text, and as orthodoxy.

Studying prayer as practice means that we are interested in doctrines of orthopraxy for the most part only insofar as they compare to lived praxis. Diane Winston raises the question, do orthodox Jews really say the berakhot prayers of thanksgiving 100 times a day? If not, it means studying the inevitable gap between prayer orthopraxis and prayer praxis.

Studying prayer as practice means taking a processual approach, and seeing prayer practices in historical context and also in the context of lives that include not praying.  Surely most lives consist of more time not praying than time praying.

Studying prayer as practice means we may be interested in linguistic analyses of prayer as it is actually practiced, spoken, sung, danced. Linguistic analysis might involve techniques of literary analysis—how often do actors use familial language, or romantic language, or images of geography, of supplication and submission, or desire and consumption? Are prayers formal and pre-scripted, or free verse and improvised? Tom Csordas asks us, what is the linguistic ideology of the prayer at hand?

Studying prayer as practice means we must be attuned to embodiment. What are the learned postures, gestures and gesticulations, movements, and breathing techniques in prayer?

What are the disciplinary regimes producing and policing prayer? How would a dance ethnographer draw the prayer practice of charismatic evangelicals, of davening Jews, of flagellating monks?

Attention to embodiment means taking seriously dress practices, issues of clothing and adornment for prayer. What are people supposed to wear to pray and what do they actually wear? What can clothing and adornment reveal about the practice of prayer, the meaning and the history of prayer, and the politics of prayer? One is veiled, another is dressed in comfortable yoga clothes, another is in the white cloth of the sanctified church; what does this tell us?

Attention to embodiment means studying the sensorial worlds that groups create: what of the incense, the music, the visual, the aesthetics of prayer? Are prayers supposed to be silent, or audible?

Studying prayer as practice involves paying attention to space, to the spaces where these practices are practiced. How is spatiality shaping and being shaped by the prayer at hand, from the church altar to the confessional booth, from the crossroads or the cemetery to the market or bazaar? How is space shaping prayer in Christine Wicker’s case of the alleged Home of the Virgin Mary near Ephesus, and in the emergency prayers in the traffic jams of Lagos we heard about from Ebenezer Obadare?

Are prayer practices portable, or are they dependent on certain spaces? Are people praying while in movement—in pilgrimage, or in cases of vehicular religiosity that are made possible by interstitial spaces of time while people are stuck in traffic?

Since we are on about space, we’d better factor in time. Are there orthodox times to pray and do people respect them? How about digital prayer clocks and apps that remind Muslims of the Call to Prayer each day. Amazing to me was Leor Halevi’s description of his “Pray Pray Revolution,” an orthopraxy machine that helps the practitioner perform prayer movements correctly and in perfect synchrony with the recitation of the proper texts, at the perfect time. Profound is the idea of praying incessantly, the idea of being always engaged in the practice of prayer.

Mustn’t the practice of prayer involve the economics of prayer? Is prayer produced and consumed? If I write to your listserv with a prayer request for my upcoming surgery and strangers I don’t know pray for me, am I practicing prayer? Am I consuming prayer? If nobody on the listserv prays for me, has prayer been practiced? Will I ever know?

Speaking of the economy—and especially for us in the United States—what does the pray-er need to buy, obtain, or trade in order to practice prayer? John Lardas Modern is researching prayer machines: how much do these rosaries or these E-meters cost, how much is Halevi’s “Pray Pray Revolution” machine, which helps detect errors so that the prayer is not “invalidated”?

What are the sensory aspects of prayer that produce the circuits of prayer between brain and body? Mark Aveyard asks how can the physical prayer practice produce cognitive, higher-levels of religious experience?

How much agency can we say people employ in prayer? Is Csordas’ case of people speaking in tongues, prayer? What is the role of agency when people “fall into tongues?” When they “fall into tongues” while driving a car, what prevents them from ecstatically driving into a tree?

How is prayer taught to the young or the novice? How is prayer practice learned? Rebekah Richert’s case of children’s conversations with the unseen prompts the question, what does studying prayer as practice tell us about how humans construct the sacred, and the divine?

Perhaps most importantly of all, what social formations develop in co-construction with a given prayer practice? How does the practice of prayer create social boundaries, and unify some groups as they denigrate other gods or spirits, or other religious groups? How does prayer practice increase violence, and cultivate peace?