James Bielo’s recent essay on walking prayer inspired me to think about other instances of prayer and communal peregrination in the history of American Christianity, especially the “prayer line.” In terms of mass crowd phenomena and the spatial organization of bodies during the performance of prayer, the prayer line was one of the most significant twentieth century manifestations of communal prayer. During the charismatic tent revivals of the 1940’s and 50’s, the prayer lines became so massive that certain techniques were adopted to organize the multitudes in need of healing prayer. Structuring the throngs within the space of the giant canvas tent, “prayer card” systems helped organize the potentially excessive revival crowds into single-file lines that followed the inner perimeter of the revival tent and ended in a serialized passage across the elevated platform of the healer. 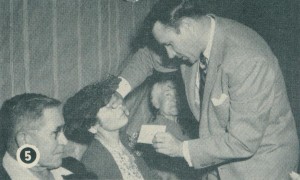 Before the commencement of the evening revival, any individual who desired the intimate patient-healer contact of healing prayer was issued a prayer card that was alphabetically, numerically, or color coded. In addition to this code at the top of the ca rd, these pieces of paper, usually the size of a postcard, included spaces where the name, address, and nature of the patient’s illness could be penciled in. This process of inscribing the prayer card often included a “faith building service” that instructed the patient in both the orderly operations of the prayer line as well as the proper techniques and attitudes to “turn your faith loose” during the performance of healing prayer. In order to ensure that the patients went through the necessary faith training, the prayer cards were “validated” with ink stamps or punches only after the patient had attended the faith building service. This process of validating the prayer card makes explicit the systematic practices of training, routinization and materialization that sustained a crucial performance in the history of charismatic Christianity: “The prayer of faith shall save the sick” (James 5:15). 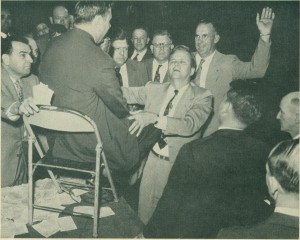 Each evening during the healing campaigns, a specific color or letter of the alphabet was called to enter the prayer line. Quite often, a patient had to attend the campaign for several days until his card was called. As the long line slowly shuffled through the sawdust paths of the tent toward the stage, the patients clutched their prayer cards with hands of sweaty expectation. Before the patient reached the healer upon the platform, she would hand the card to the healer’s assistant, who in turn would relay the card to the healer. The information upon the card allowed the healer to efficiently identify both the name of the patient and the nature of the illness, and in this way helped to expedite the movement of the prayer line. More than this, the prayer card was a material embodiment of the “prayer of faith” itself: the physical surface upon which a properly trained “faith” and a self-conscious reflection upon illness was inscribed.  As hundreds of ailing bodies passed through the hands of the healer like a living strand of prayer beads, piles of cards accumulated upon the healing platform (see image above). It is in this pile of cards strewn at the foot of the healer that the “prayer of faith” makes its appearance and begins to circulate in the world.