Dolls and phonographs share an intimacy with prayer. One of the first commercially available cylinders from the Edison phonograph company, for example, was a component in the “Edison Talking Doll” (1888). Hidden within the sawdust-filled  recesses of this “Dollphone,” one of the interchangeable cylinders played upon the automatic phonograph was the ubiquitous bedtime prayer, “Now I lay me down to sleep.” While Edison was busy manufacturing toy prayers, Emil Berliner, the pioneer of the flat “Gramophone” disc, was inscribing the first copies of “The Lord’s Prayer” in an old German doll factory (1889). Since the early days of phonography, praying dolls have been produced on a mass scale as a playful means to imprint pious attitudes upon the developing child. 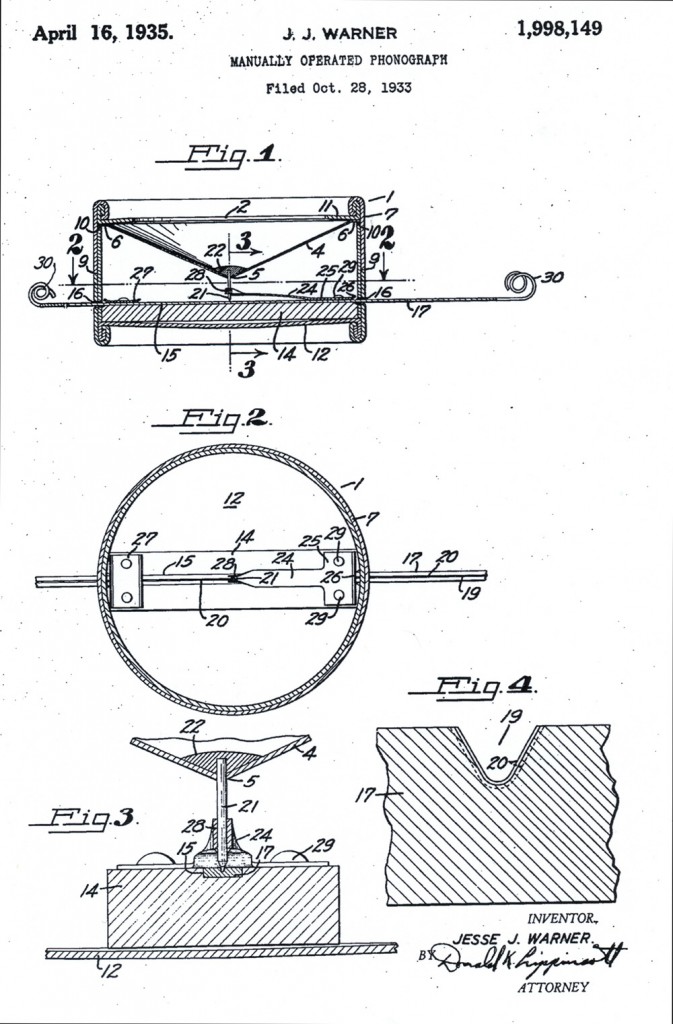 The praying doll featured here was manufactured by the New York-based J. L Schilling Company. Although this particular Schilling Talking Doll was produced throughout the latter half of the 1940’s, the “manually operated phonograph” that enunciates her prayers was patented earlier, in 1935 (see patent illustration). After ten complete turns of the windup key located to the left of her belly button (normally hidden by the lacy fabric of her dress) and a pinch of the spring release to the right, she begins to pray:

I pray the Lord my soul to keep.

Please God teach me how to pray,

And make me better everyday.

If you listen closely to her prayer, a robust gasp is clearly audible after her recitation of the first stanza. The breath of the mechanical doll recalls the expurgated stanza from the original version of the bedtime prayer, first published in the New-England Primer in 1737 (see illustration):

I pray the Lord my Soul to keep.

If I should die before I wake,

I pray the Lord my Soul to take. 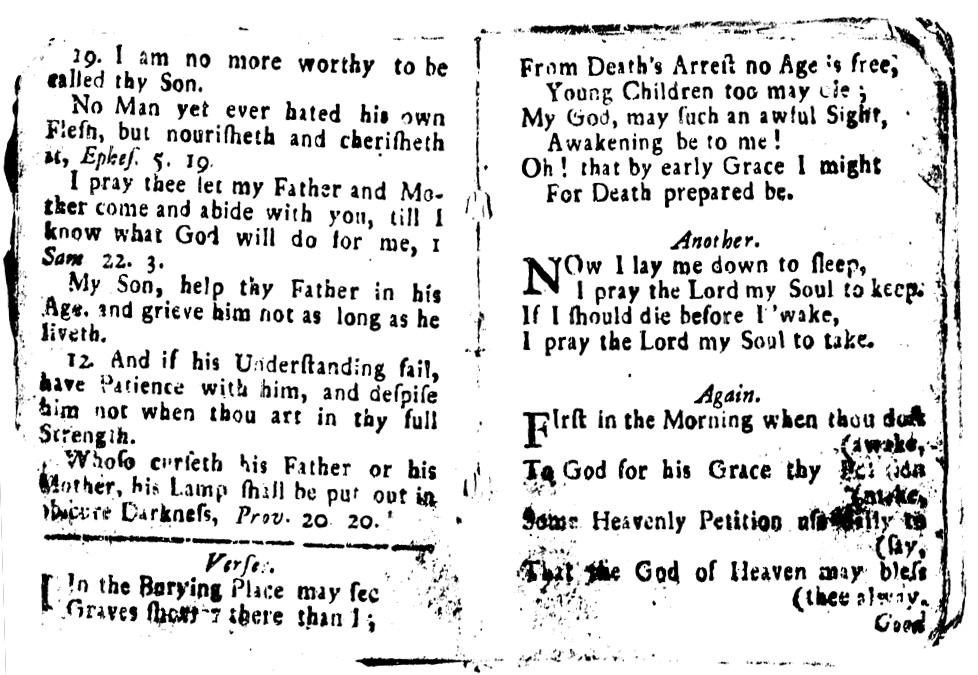 In the revised version, a daily technique of the self (“make me better everyday”) replaces a diurnal reminder of the presence of death. An examination of the verse preceding the bedtime prayer in the original Primer, however, suggests that the praying doll reinscribes the deathly logic in the selfsame moment it attempts to surmount it.

In the Burying Place may see,

Graves shorter there than I.

From Death’s Arrest no Age is free,

Young Children too may die;

My God, may such an Awful sight,

Awakening be to me!

For Death prepared be.

Through a mimetic process wherein the child measures his or her body against the stones of the grave, an awareness of death and its temporal rhythms is somatically-inscribed upon the child. In the case of the praying doll, it is not an imaginative practice of reading that enlivens a particular awareness of death and duration, but the mechanical reproduction of the praying voice. During one of my recent research interviews, a woman who grew up playing with a Schilling doll recalled that her most vivid memory of this toy was the periodic breakdown or malfunction of its mechanism. As the spring of the machine winds down, the childish voice-in-prayer undergoes a monstrous decomposition, as if the youthful voice had traversed a lifetime in a matter of seconds. At other times, the synthetic belt that converted motion to the phonograph would completely break, causing the doll’s prayer to fall suddenly silent.

The doll’s mechanical recitation marks an important technological shift in the practice of teaching children to pray. The child’s private devotions are no longer founded upon a particular Colonial practice of phonetic alphabetization and the concomitant “hearing” of the silently read biblical passage as a divine voice within the mind. Instead, learning to pray, since the late nineteenth century, has been animated by a special effect that allows the pious child-in-training to hear the rhythms, intonations and other poetics of the voice-in-prayer repeatedly reproduced in real time. The manual of childhood devotion, that “little key of Heaven,” was replaced by a windup key whose spring enlivens the prayers of a machine.

A doll’s acephalous prayers challenge us to rethink the locus of agency, efficacy, and experience within the practice of prayer. The special effect of prayer appears at that point of indeterminacy between subject and object, where in a moment of sensory disjuncture, the sacred and the everyday are collapsed upon an object that refuses to remain silent. In this moment, the object is not merely a praying doll, but a doll who prays. And as the mechanical clicks of her engastrimythic speech reach the Heavens, the stenographic hands of recording angels inscribe her prayer into a medium that never forgets.