Pamela E. Klassen is a Professor in the Department & Centre for the Study of Religion and past Director of the Religion in the Public Sphere Initiative at the University of Toronto. She is the author of Blessed Events: Religion and Home Birth in America (Princeton University Press, 2001) and Pathologies of Modernity: Medicine, Healing, and the Spirits of Protestantism (forthcoming). Klassen is also co-editor, with Courtney Bender, of After Pluralism (Columbia University Press, 2010). Read Pamela Klassen's contribution toReflections on summer reading. 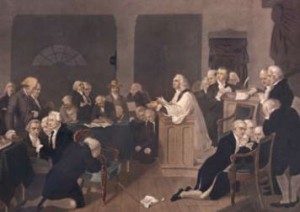 Speaking in the tongue of Christianity in an age of pluralism, the praying citizens of Greece, New York knew enough to keep it vague when bringing their supplications to town council. Winnifred Sullivan’s reflections on the legal wrangling over public prayer in the town council of Greece included examples of how Christians prayed for their town leaders to be “filled with the spirit of wisdom” and asked that their neighbours would come to see the virtues of “interrelationship.”