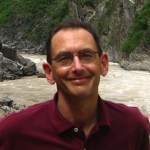 Stephen F. Teiser is D.T. Suzuki Professor in Buddhist Studies and Professor of Religion at Princeton University and Director of the interdepartmental Program in East Asian Studies. He is interested in the interaction between Buddhism as a pan-Asian tradition and the religions of China. He received a B.A. from Oberlin College (1978) and an M.A. (1983) and Ph.D. (1986) from Princeton University. His books include The Ghost Festival in Medieval China (1988), The Scripture on the Ten Kings and the Making of Purgatory in Medieval Chinese Buddhism (1994), and Reinventing the Wheel: Paintings of Rebirth in Medieval Buddhist Temples (2006). Teiser’s current research focuses on the liturgical materials in the cache of early manuscripts written in Chinese and other Asian languages recovered from the town of Dunhuang (Gansu Province, China) on the edge of the Taklamakan Desert.

Perhaps this is presumptuous to ask. But it’s an important question, which the interlocutors in Charles Hirschkind’s engaging dialogue broach only indirectly.

The representatives of Culture and Cognition worry about relativism: Does the study of prayer in a particular time and place allow us to say anything interesting about religion as a universal phenomenon? The actors in Hirschkind’s play fret over cultural differences. But just how far apart are the differences?

Charity (Sanskrit: dāna, derived from the same Indo-European root as Latin: dōnum, gift) is the most fundamental of all Buddhist virtues, so it follows that prayer in the sense of the words accompanying the act of charity would be important in all Buddhist cultures. In one of the most commonly performed rites in the Buddhist world, the memorializing of one’s ancestors, the devotee offers purified thoughts or makes a concrete donation to the Buddhist Order and utters a prayer assigning the benefit of the act to the deceased.