Todd Sanders is Associate Professor of Anthropology at the University of Toronto, and has worked in Africa for two decades. He has written on rainmaking, witchcraft, accountability, transparency, conspiracy and climate change, and has an abiding interest in social and scientific knowledge practices. His books include: Magical Interpretations, Material Realities: Modernity, Witchcraft and the Occult in Postcolonial Africa (with H.L. Moore, Routledge 2001); Transparency and Conspiracy: Ethnographies of Suspicion in the New World Order (with H. West, Duke 2003); Beyond Bodies: Rainmaking and Sense Making in Tanzania (Toronto 2008) and Anthropology in Theory: Issues in Epistemology (2nd edition with H.L. Moore, Blackwell 2013). For an article on Tanzanian buses, see his ‘Buses in Bongoland: seductive analytics and the occult.’ Anthropological Theory 8(2), 107-132, 2008. 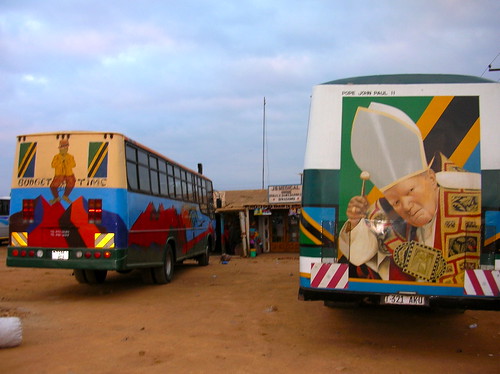 Professor Ebenezer Obadare’s article provides a welcome addition to social science discussions on materiality, mobility, and religiosity. These discussions come in many forms, move in different directions, and weave their way through many recent concerns and theoretical turns. His proposal—vehicular religiosities—promises much, and usefully highlights one arena of material-religiosity-on-the-move that has received surprisingly little attention in Africa.