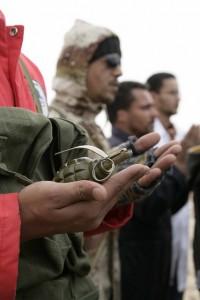 The January 24, 2013 issue of Nature features “The Ritual Animal,” an article by Dan Jones on the study of ritual that draws on research conducted by New Directions in the Study of Prayer grantee Jeremy Ginges.

The article focuses on research that Brian McQuinn and Harvey Whithouse conducted while McQuinn was traveling with Libyan rebels in 2011. They focused on understanding how the rebels “used ritual to create solidarity and loyalty amid constant violence,” and how rituals evolved over a period of time marked by intense combat and victory.

Rituals are a human universal—”the glue that holds social groups together,” explains Whitehouse, who leads the team… Rituals can vary enormously, from the recitation of prayers in church, to the sometimes violent and humiliating initiations of US college fraternity pledges, to the bleeding of a young man’s penis with bamboo razors and pig incisors in purity rituals among the Ilahita Arapesh of New Guinea. But beneath that diversity, Whitehouse believes, rituals are always about building community—which arguably makes them central to understanding how civilization itself began.

McQuinn and Whitehouse operate on the theory that rituals are either “doctrinal” or “imaginistic.”  In the first instance, rituals are easily transmitted to both children and strangers, and are suited to large-broad-based communities “that do not depend on face-to-face contact.” By contrast, “imaginistic” rituals are more suited to small, intensely committed groups, and are often more traumatic in nature, allowing for the creation of strong bonds among the participants.

Jones contextualizes McQuinn and Whitehouse’s research within a larger set of studies conducted with other communities around the world. In particular, he draws on research conducted by Ginges and his colleagues in Palestine.