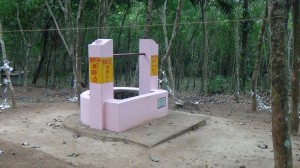 The first case in point took place on February 10, 1937, in the village Thurithikkara, located in the Quilon district of Kerala where the Salvation Army was actively working among the Dalits. In this village, the Dalits were not allowed to take water from either the common water supply sources or from the landlords’ wells. The Dalits in the village had just one well, which had dried up in the summer.

It was in this context that one Dalit family faced a serious problem of water scarcity on the occasion of the marriage of their son. A person had dug a well in a nearby paddy field, and this Dalit family requested permission to use his water. He allowed the Dalit family to draw water from his well for the wedding. However, they had to walk through property owned by another upper caste landlord, a Nair, to reach the well in the paddy field. Seeing Dalits crossing his property for water, the landlord rushed to the spot with his men and drove the Dalits off his property, depriving them of easy access to water. The disheartened and sorrow-stricken people then approached their empty, dried up well, and began to pray. 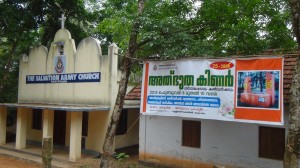 They prayed there for a long time—men, women, and children together. Suddenly, they heard a loud noise from the depths of the well. Upon looking inside, they found—to their shock and astonishment—the water actually rising. Their joy knew no bounds. The next day’s feast went well. The water level of the well went down further and stabilized. The people recall that the well never dried up afterwards.

Today, people in Thurithikkara remember this incident as a very important event that marked God’s blessings upon them and God answering their heartfelt prayer. When our team of researchers visited them, ,villagers gave us copies of notices and pamphlets announcing the anniversary celebration of that event and the special prayer commemorating it. Now people collect water at the “miracle well,” as they call it, and carry the “sacred” water in small bottles to pour into their own wells lest they dry up. The significant aspect of this narrative is the instance of deploying prayer as a powerful instrument in resisting the embargo of the landed gentry.

I will not go into a rational interpretation of the narrated event, or try to scrutinize the event to separate myth from reality. My concern here is to analyze the narrative: to gain entry into aspects of popular religion, of the role of prayer, and of the consciousness of the people. 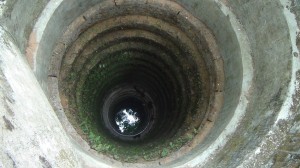 In another context, the subaltern historian Shahid Amin talks about the popular perception of Gandhi among the peasants of the villages in Gorakhpur district of Uttar Pradesh, where people found two springs sprouted in a well three feet above the water level; this they attributed to the miraculous powers of the name of the Mahatma Gandhi. Amin interprets this as involving a particular construction of the image of Gandhi suffused with the elements drawn from the popular religion of the peasant masses. In our case it seems that those Dalits who joined the missionary churches expected a millennial transformation and the resolution of crises in individual and social life.

We wish to present another example of prayer that helped resolve the crisis of individuals and society. It is useful here to draw on our fieldwork . On March 18, 2013, we traveled to Kottarakkara in south Kerala to meet a group of Dalit Christians who had been holding monthly prayer meetings for the last seventy-five years. I did not know about this until it was relayed to me by a friend during a consultation on Dalit prayers that I organized. He subsequently sent me some materials that these Dalit Christians had published on the occasion of the 75th anniversary of their monthly prayer meeting. So we decided to go and meet these people as part of the larger fieldwork we wished to pursue there. For the meeting of March 18th, we invited fifteen people who are both active in the community and with the prayer meeting. A Bishop was present from CMS Anglican Church, one of the exclusive Dalit Christian Churches. The rest of those present were comprised of community elders and some young people who are active in Dalit Christian social movements.

In the course of our discussion, one of the participants, a retired homeopath in the Service of the Government of Kerala, recollected a particular incident in which prayer was central in resolving his crisis. His parents were landless laborers working for the upper caste landlord in their area. Every morning, while he attended school, his parents would go to work in the landlord’s field. It was very rare for him to have anything that could be termed a proper breakfast. One day he told his father that he would not go to school because he was hungry. Hearing this, his father asked him to come to the field so that he could share the meals provided to the laborers. The boy was happy about the prospect of getting a meal, and so around eleven in the morning he went to the field where his parents were working. All the laborers had assembled for the meal and were waiting to be served. 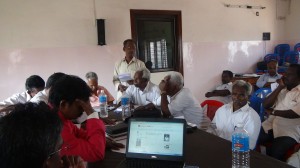 After arriving, the boy looked around but could not find where the food was kept. Finally his father asked him to come along to eat, and only then did the boy really understood where the food was waiting for them. The landlord’s people had dug holes in the ground, put plantain leaves inside of them, and would serve gruel in the holes in the ground lest they become polluted by their proximity to Dalits! The plantain leaves kept the gruel from getting soaked with earth. The laborers would use a kind of spoon made of the leaves of the jackfruit tree or of coconut shell to scoop up the gruel and eat it. Sometimes they would slit the plantain leaf, drain the water, and eat the rice. Seeing that his son was very hungry, his father tore the plantain leaf, drained the water, and scooped up the rice from the hole on the ground. The boy was shocked and started crying. He was unaware of the situation that his parents faced every day when they went to work. Through his tears, the boy requested his father that he never be asked there again for meals. On the way back home the boy continued to cry, and he prayed with tears to God that this situation would come to an end and that his fate would change.

This incident must have happened around the late 1940s or early 1950s. And yet, halfway through narrating the incident to us, the man began to choke up, leaving everyone present in a difficult situation. He told us that he believes it was his prayers that helped him to overcome poverty and deprivation through education and winning a government job that raised up his family out of the debilitating situation created by caste oppression.