[Editor’s Note: This essay serves as the introduction to Courtney Bender’s portal on “The Architecture of Multi-faith Prayer.”] 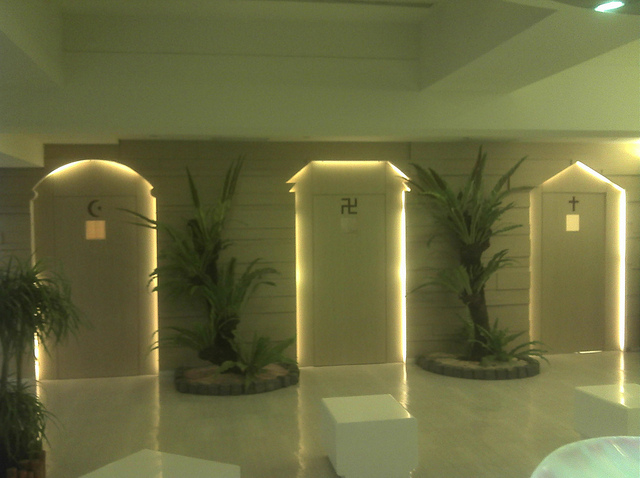 When you stop to think about it, there is something sort of strange about the multi-faith chapels, buildings, and prayer rooms that form a familiar part of our contemporary institutional landscape. We find them in airports, hospitals, prisons, shopping malls, entertainment complexes, and universities. They include soaring architectural landmarks and simple rooms where design seems to be an afterthought at best. Unlike chapels, churches, synagogues, and mosques—all of which are designed for particular ritual activities and draw on or speak to specific theologies and religious histories—multi-faith spaces must make it possible for individuals or groups with diverse theologies, rituals, and symbols to pray. So, why does this not seem like an impossible task? Or rather, why does it appear to be a necessary one?

At first blush, the strangeness of multi-faith (and less common interfaith) spaces appears to be the very question of shared space. While we can point to many holy or sacred sites that multiple groups might claim or share, the modern multi-faith prayer rooms, chapels, and buildings in this portal are almost all built and designed within secular institutions. They are placed on land that is almost by definition prosaic, perfunctory, not uncommon. Indeed, many are built in the crevices and liminal spaces of modern life—that is, where people are often on the move or away from some other place called “home.” This is where we anticipate the presence of a heterogeneous, “multi-religious” public, and where we apparently also find space to accommodate or promote our visions of religious pluralism.

By now, we are quite adept at analyzing multi-faith architecture as expressing the history and politics of religious pluralism. For instance, we can trace the genealogies of “expanding” religious pluralism through the developments in American and British hospitals: many hospitals with specific religious histories have retrofitted their denominational chapels to take into account the needs of a much wider range of faith traditions among staff and patients. We can, likewise, compare the proposed Bet- und Lehrhaus in Berlin’s explicitly recuperative project for tri-faith dialogue with the 1939 New York World’s Fair’s more triumphal vision. We can evaluate the numerous ways in which multi-faith buildings wittingly or unwittingly reproduce types of religious exclusion through various design elements and, likewise, pay close attention to the ways that these buildings either seek to architecturally reinforce distinctions among religious groups or offer a vision of post-religious spiritual unity.

Reading these buildings’ presentations of religious pluralism is important. But that analytical task has often overshadowed the more puzzling aspects of these buildings: not only that they seek to put people from different religions under the same roof, but that they expect them all to do something that can be called prayer. Why and when did we decide that “prayer” (or its cognate “prayer and reflection”) signals something that all religious people might wish to do, that requires special space, and that is benign enough to take place across a wide range of secular settings?

We could investigate the prayers in multi-faith spaces in various ways. We can visit these spaces and observe how they are used, as some scholars have done. We could also compare these spaces built for multi-faith prayers with the more spontaneous, but also ubiquitous, “interfaith prayer services” that organize prayer and religious heterogeneity quite differently. The approach that this portal makes possible, however, is somewhat different. It invites readers to think about the ways that architects and designers – along with their various clients and constituencies – confront and answer these questions. For instance, should the room be oriented toward a particular set of coordinates, and if so, should that be subtle or explicit? What religious objects, texts, or other material things need to be on hand, and where should they be stored? Is food or fire allowed in the room? How much sound will the people praying make? What kinds of physical, aural, or temporal boundaries are necessary to keep the various groups’ or individuals’ prayers from overlapping or leaking into each other?

Answers to these questions make up the literal and metaphorical furniture of modern multi-faith prayer spaces, and complicate and clutter the poetics of simple and streamlined modern minimalism that most architects nonetheless draw upon in designing multi-faith buildings. Many multi-faith spaces are shaped by the kind of daily, ongoing addition and subtraction of “furniture” that can cast “into doubt the entire effect of some modern buildings,” as architect Robert Venturi put it memorably in Complexity and Contradiction. Writing against the modernist architectural orthodoxies of his day and their “moral puritanism,” he argues that “our buildings must survive the cigarette machine.”

Multi-faith modernist spaces are poised at the nexus of two often countervailing ideals, both of which center on the ways that the space is used by people who pray. On the one hand, there is a desire to design space that “everyone” can recognize and experience as “sacred,” which lends itself to classical modernist motifs. And on the other hand, there is a desire to accommodate the multiple and specific bodies, actions, and materials that people using the space require to pray as they know how. This tension, I believe, shapes and constructs the possibility for a new kind of prayer to take shape—to resonate more strongly and connect, in different ways, to the experience of praying and speaking and acting religiously that people experience otherwise in their private lives, in homes, in their religious communities and elsewhere. What do these spaces tell us—or tell those who come to pray (or to “reflect” or to “meditate”) in them—about what we think prayer is, who it involves, and what it can do?

This portal is an invitation to explore how prayer is designed to happen and how it operates in these strange places and in our strange times. Each entry that follows includes images, academic papers investigating aspects of multi-faith prayer spaces and, where possible, links to the architectural firms involved and to the websites of the spaces themselves. My selection criteria in choosing these entries was idiosyncratic – with only a few exceptions, I selected sites about which something has been written, that have some notable architectural features, or that highlight a particular set of historical ideas about multi-faith prayer. Readers will note that I have focused exclusively on Europe and the United States –a choice that reflects the limits of my expertise, not the absence of their appearance elsewhere. In that way, this portal is intended as a point of departure from which to consider prayer in our times, embedded not only in religious communities and traditions, but also flourishing across a range of secular institutions and imaginaries.