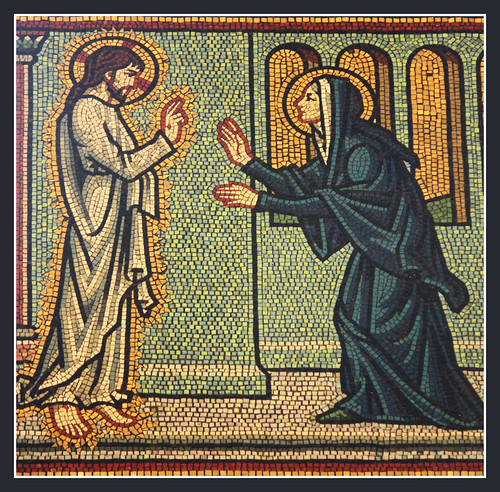 I love the portal that Robert Orsi has created.  He and I share a fascination with “real presences” in the Catholic (and other) traditions and in creating the portal he has highlighted some of my favorite books dealing with presence in the Catholic tradition. I also very much appreciate his essay locating the Catholic insistence on presence in relation to the history of the discipline and his continuing efforts to highlight the extent to which theories of religion mounted implicit or explicit critiques of Catholicism.

In keeping with our shared interest in exploring the wide range of issues the topic presents for the study of religion, I’ll add an angle that I find intriguing.

The main thing I’d point out is that this idea of perceiving supernatural presences is not limited to personal devotional practice, to those Catholics invested in apparitions of the Virgin Mary, or even to the Catholic understanding of the Eucharist.  The very basic Christian claim that Jesus was the Messiah rests on the claim that he died and rose from the dead, which in turn rests on the claim that he appeared to Mary Magdalene, the apostles, and then to Paul after his death both as a human presence and then in the breaking of bread. Check out Paul’s letter to the Corinthians (1 Corinthians 15:3-8) to get a sense of how crucial the appearances were in the formation of the tradition.  More so than the empty tomb, accounts of the post-mortem appearances of Jesus established the core Christian claim of resurrection and, thus, the revelation that Jesus was the Christ.

Putting things this way raises what for me is the most interesting question, that is, how do we know—how does anyone know—that a supernatural figure is present?  And, in a related vein, how does a tradition both maintain the possibility of presence and, at the same time, maintain its own authority and authoritative understanding of what counts as a “real presence”?  Traditions have worked out various ways to do this.  Catholicism does it by distinguishing between public and private revelation.  The former, which culminates in Christ “as the fullness of all revelation,” constitutes the “deposit of the faith.”  It rejects a priori any revelation that claims to “surpass or correct” it (Catechism of the Catholic Church, §67).  Private revelation does not add to the deposit of faith and, by definition, must be congruent with it.  Bishops are charged with investigating “alleged apparitions and revelations,” that is, claims regarding potentially untoward “presences.” After establishing that such claims are indeed being made, Normae Congregationis, issued by the Congregation for the Doctrine of the Faith in 1978, instructs bishops to evaluate the claims in light of the qualities of the seer (are they mentally healthy, honest, sincere, and obedient to church teaching?), the content of the revelation (does it conform to church teaching?), and the fruits of the event (are they positive and enduring?).

These criteria, with their exquisite circularity, suggest the difficulties inherent in trying to judge claims regarding the perception of supernatural presences apart from preexisting beliefs about whether such exist or not.  Insofar as such claims involve perceptions that seem real and seem to come from outside the self, but for which there is no externally verifiable stimulus, these phenomena would fall under the general scientific definition of “hallucinations.” The boundaries between real/not real and self/not self, however, depend in part on culture, training, and theology, factors that such definitions do not take into account. Moreover, much of the research on hallucinations has focused on hallucinations in the context of disabling mental disorders such as schizophrenia, but numerous studies indicate that hallucinations are relatively common in the general population and can be triggered by a number of factors.  The most common are hallucinations of a dead loved one in the context of bereavement.  A few scholars (see, for example, Gerd Lüdemann and Kathleen Corley) have suggested that the claims that Jesus appeared to his followers after his crucifixion were bereavement-related experiences of this sort.  Most orthodox Christian scholars reject this idea as incompatible with belief in the resurrection.  I’m not so sure it is.

From a religious studies perspective, I would ground what the Catholic Church refers to as general revelation in the spiritual perceptions of the early church—Jesus’s first followers—working through rather than in opposition to natural processes, such as grief.  Just as historians and most Christian theologians acknowledge that the early Church decided what early writings to canonize as scripture, so too I think it makes sense to acknowledge that the early Christians decided what events to recognize as revelatory.  Acknowledging that both Jews and non-Jews were divided in their perceptions of Jesus highlights the role of spiritual perceptions in deciding whether Jesus was in fact the messiah and the role of that decision about Jesus in constituting the church as a community of believers.  This way of thinking about the emergence of early Christianity makes sense to me as a scholar of religion because it provides a way to understand differences in perception and the way those differences led over time to the formation of different religious traditions.