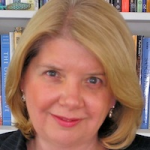 Elizabeth Drescher is a faculty member in religious studies and pastoral ministries at Santa Clara University. She is also a senior correspondent for the online magazine Religion Dispatches. Her recent research and writing has focused on the spiritual and pastoral implications of the increasing integration of digital social media in everyday life. Dr. Drescher is the author of Tweet If You ♥Jesus: Practicing Church in the Digital Reformation (Morehouse, 2011) and, with Keith Anderson, Click 2 Save: The Digital Ministry Bible (Morehouse, 2012). Her work has been highlighted by the Atlantic Monthly, the Utne Reader, the Washington Post, Australian Radio National, the BBC, CNN, State of Belief Radio, and other national and international news outlets. Her research on the prayer practices of religious Nones will find its way into her latest book project, Choosing Our Religion: The Spiritual Lives of Religious Nones (Oxford University Press). She tweets at @edrescherphd.

As one national tragedy follows another, the ubiquitous Twitter prayer meme—the most recent in the aftermath of the tornados in Oklahoma (#PrayForOklahoma)—continues to attract attention from media religion-watchers.

People are often surprised to learn that a substantial portion of people who are not affiliated with traditional, institutional religions—Nones—pray on a reasonably regular basis. Indeed, close to twenty percent of those who identified as Atheist or Agnostic in a study by the Pew Forum on Religion and Public Life reported praying on at least a monthly basis.

I will share preliminary findings from my research on the spiritual lives of the religiously unaffiliated—Nones—at the Princeton Forum on Youth Ministry, April 23-26 at Princeton Theological Seminary.

There’s been a lot of praying going on around the globe, what with the recent elevation of new leaders in the Roman Catholic Church and the Anglican Communion. Throughout the Christian Holy Week, both Pope Francis and Archbishop Justin Welby called on the faithful to join them in prayer, but they also made a point to included the religiously unaffiliated—Nones—in the prayerful love.

If the population of the religiously unaffiliated continues to grow, as the trend lines in most of the reputable data seem to suggest, I have to wonder what effect Nones’ constructions of prayer as a meaning-making practice will have on American religiosity in general. Will prayer vacated of religious content continue to express something significant about personal, spiritual, social, or national identity in anything like the ways it has in the past? Or, will the term itself become a dead metaphor, pointing to a vaguely psychological or perhaps psychosocial practice that no one would think of as having any religious content (as is largely the case with the word “contemplate”)?

I will be sharing early insights from my research on the spiritual lives of the religiously unaffiliated—Nones—at a forum sponsored by the University of California, Berkeley’s Religion, Politics & Globalization Program on March 13.

Two recent trends introduce new questions about the practice and meaning of prayer in the lives of contemporary believers. One is the dramatic growth in the population of believers who do not specifically identify or affiliate with institutional religions—so-called “Nones,” who answer “none” or “no religion” when asked with what religious group they identify.