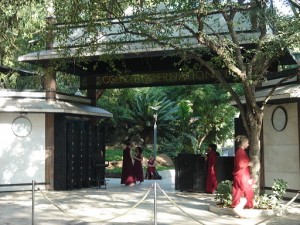 Diane Winston, Knight Chair in Media and Religion at the University of Southern California, is on the advisory committee for New Directions in the Study of Prayer. A veteran of yoga and meditation practices, she looked forward to her time at Osho as an idyllic retreat.

(“Rage Against the New Age Machine”) 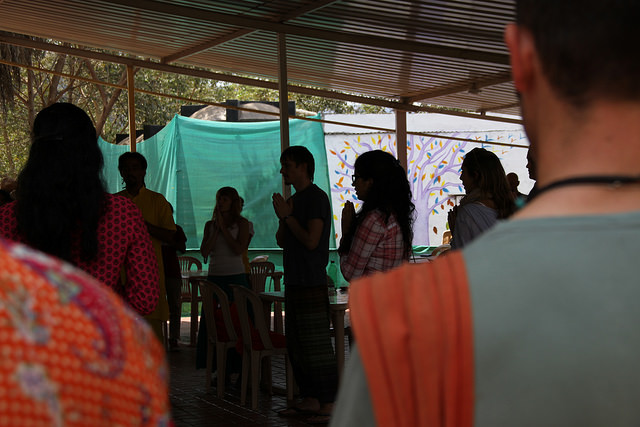 Grace Lim, a graduate student in journalism, comes from a deeply religious family. The weekend at Osho reinforced her Christian identity, spurring her to re-think the importance of sharing her faith with others.

As a born-again Christian, the idea of spending a few days at an ashram definitely put me on edge. I’d grown up in a Christian home, but had my “Aha!” moment the summer before I started college. I’d known about Jesus my whole life, but in an instant of revelation  it was like someone had ripped a blindfold off my eyes. I could finally see how Jesus related to me, how he loved me and died for me. My whole life changed, and I became what people call a “true believer.” I believe that Jesus is the Lord of my life, and that there’s no saving grace in this world outside of Him. Which is why I was so nervous about going to a New Age-y meditation center. Would going to this place shake my faith? Would I become susceptible to “spiritual battles?”

As part of the Religion Reporting course at USC Annenberg, half of the class had the chance to visit the Osho International Meditation Resort in Pune, India for a few days. I was wary of the place, not only as a religious center completely separate from my beliefs, but also because of the organization’s troubled past.

Osho’s founding leader, also called Osho, was previously known as Bhagwan Shree Rajneesh. Rajneesh was a spiritual leader who drew his philosophies from religious teachings worldwide. After starting the retreat center in the 1970’s, Osho’s controversial teachings increased tensions with the Indian government. Relocating to the U.S. in the 80’s, he established a commune in Oregon, which ran into difficulties with local authorities. Problems escalated when the group’s leadership committed acts of bioterrorism in nearby towns. Osho was forced to flee. After all the controversy, Osho and his followers finally settled back in Pune, where they built up a sleek Westerner-friendly resort.

Despite my skepticism, I felt determined to shape it into a personal adventure. I knew there would be times when I would be asked to do things during meditation that might go against my beliefs. But I still wanted to keep an open mind to the teachings.

The morning of our first full day at the resort, our group joined an orientation class about the different types of mediations available. One of the distinguishing characteristics of Osho’s teachings is the infamous “dynamic meditation.” The introduction to this form of meditation began with a video of a medley of Oshoites performing the process in a bright, marble-floored room, their toned bodies and attractive faces enhanced by their fitted crimson robes.

Narrated by a monotone male speaker, the video walked through each stage of the process. The first stage is erratic, animalistic breathing motion and the second is called “Explode.” Participants are free to scream and laugh, jump, cry or kick—wherever their body leads. The third stage is jumping on the heels of the feet with arms held high, shouting, “Hoo! Hoo! Hoo!” from the depths of the “sex center.” The fourth stage is a 15 minute freeze, and the fifth and last stage is celebration, loud music, wild dancing and revelry.

Then it was our turn. Dynamic meditation is performed with eyes closed, so blindfolds were passed around. I gingerly made my way to the rear of the room, self-conscious and uncomfortable with what was about to happen. I took the soft eye mask and velcroed it around my head, wondering when it had been washed last.

And then it began. In the darkness of my masking, I could hear the harsh, rapid breathing of dozens around me, and I was so thrown by the loud intensity, I felt lost. I tried to breathe on my own, following the instructions to breath deep and without pattern, but all I could manage were a few shallow breaths through the nose. I felt like a fraud, uncomfortable and slightly frightened, shocked at how my classmates were taking this so seriously and passionately right off the bat. I couldn’t understand the reasoning behind the breathing. What would breathing like a crazy animal do for me, release in me? It felt pointless, so I didn’t put much effort in trying.

After a quick 60 seconds, the explode section began, and people began to scream. What had started as a mildly uncomfortable exercise became an excruciatingly torturous experience. Completely blinded and subjected to the guttural screams and yells of my neighbors, I was disturbed by the honesty of their cries and the fear that shook my heart. I felt trapped by not being able to see, as if I couldn’t run away from the pain and desperation I could hear in the howls surrounding me. My heart began to race, and my breathing became laborious. I prayed, but I don’t remember what I said. All I knew was that I had to get out of there.

Sliding the blindfold off my head, I ducked my head and averted my eyes, still conscious of protecting the privacy of my cohorts’ experiences. Thankfully I was just a few steps away from the door, and slipped quickly outside. Leaning against the wall, I lifted my eyes up to the green foliage shading the pathway, catching my breath and willing my heartbeat to slow down. I prayed, asking for peace, for myself and for those who were still letting off steam in the room.

After a little while I could hear the deep, primate-like “Hoo! Hoo! Hoo!” portion begin within the room, which made me grin, even in the midst of recovering from my panic attack. My breathing gradually returned to normal, and so did the sounds coming from the room.

Trying to process my experience later, what I couldn’t stand, and what made me rush out of that room, was coming face-to-face with the questions I could hear in the people’s cries. “Where are you God? Can you hear me? Are you listening? I’m dying here, don’t you care?”

It hurt me, because I know God cares, but these people hadn’t experienced it. And I wished I could help, but no one here seemed to want to hear the truth that I believe. That’s why they were at Osho.

As uncomfortable as it made me feel, facing another belief system directly in the eye forced me to confront what is an unmistakable, unshakable truth in what I believe. Not only is Jesus my way, my truth, and my light, He is all those things for every other person. And no matter how much I try to believe that I am an open-minded and non-judgmental person, that truth is unshakable. I was confronted with a room full of lost and broken people, and I realized that I had failed to help them by sharing that fact. I had failed in preaching what I practiced.

So in some ways, though Osho never shook my faith, it forced me to face the fact that I haven’t been true to my beliefs, and that I haven’t been a good believer in a long time. Before going to Osho, I thought that not hiding the fact that I was a Christian was good enough. But Osho helped me realize that I’m not the satisfactory Christian I originally thought I was. Thankfully I believe in a perfect Savior who forgives and still loves an imperfect person like me. Jesus isn’t looking for a good Christian. He’s looking for me.

Rosalie Murphy, a senior majoring in journalism and history, went to Osho. A practicing Catholic, Rosie was unsettled by the experience of dynamic meditation, and the ensuing spiritual crisis peeled back a layer of her defenses.

(“What Happens When a Journalism Student is Forced to Attend a Meditation Retreat in Pune?”)

Chhaya Nene, a graduate student in journalism, had family in Pune and Mumbai, but none had visited Osho, where she spent the weekend. Although Osho’s teachings have a basis in Hinduism, Chhaya did not think what she heard there squared with what she knew about her tradition.

Katherine Davis Young, a graduate student in journalism, was a yoga instructor before coming to journalism school. Her time at Osho helped her see how she had changed, and why she missed some of what she’d left behind.

(“Maybe I’m as Weird as These Weirdos: Why I Reluctantly Got Something Out of My Time at Osho”)